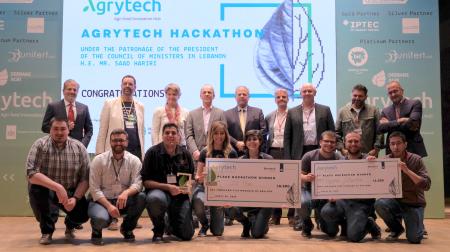 Beirut, Lebanon : IO Tree, a startup which aims to design and implement a machine to monitor the presence of the med fruit fly and inform the farmer when it’s the best time to spray, won first place at the Agrytech Hackathon event this weekend organized by Berytech, the Ecosystem for entrepreneurs in Lebanon. The Hackathon was held under the Patronage of the President of the Council of Ministers H.E. Mr. Saad Hariri, represented by Minister of Administrative Development H.E. Mr. Nabil de Freige, and supported by the Embassy of the Kingdom of the Netherlands.

The first-place team, which included Christina Chaccour and Nisrine El-Turky, won $6,500 and has been pre-selected to join the second edition of Berytech’s Accelerator Program Agrytech, which starts in June 2018 with a boot camp; the team now has access to up to US$100K in support and grants through the program. The team had a functioning prototype to demonstrate in front of the judges and audience at the Hackathon and will now have the chance to take their startup and idea to the next level.

Launched by Berytech in 2017, the Agrytech Program, co-funded by the Kingdom of the Netherlands, aims to attract the best startups in the agri-food sector and provide them with appropriate technical and commercial resources as well as community support to expand their ideas into successful businesses with a global impact.

Chairman and CEO of Berytech, Maroun N. Chammas, commented: “We are very excited to organize these events under the Agrytech Program, proving that Lebanon can play a role in solving world challenges in the agri-food sectors.” Chammas thanked Prime Minister Hariri for his valued patronage of the Agrytech Hackathon, “it but emphasizes the passionate support he continues to show Lebanese entrepreneurs.”