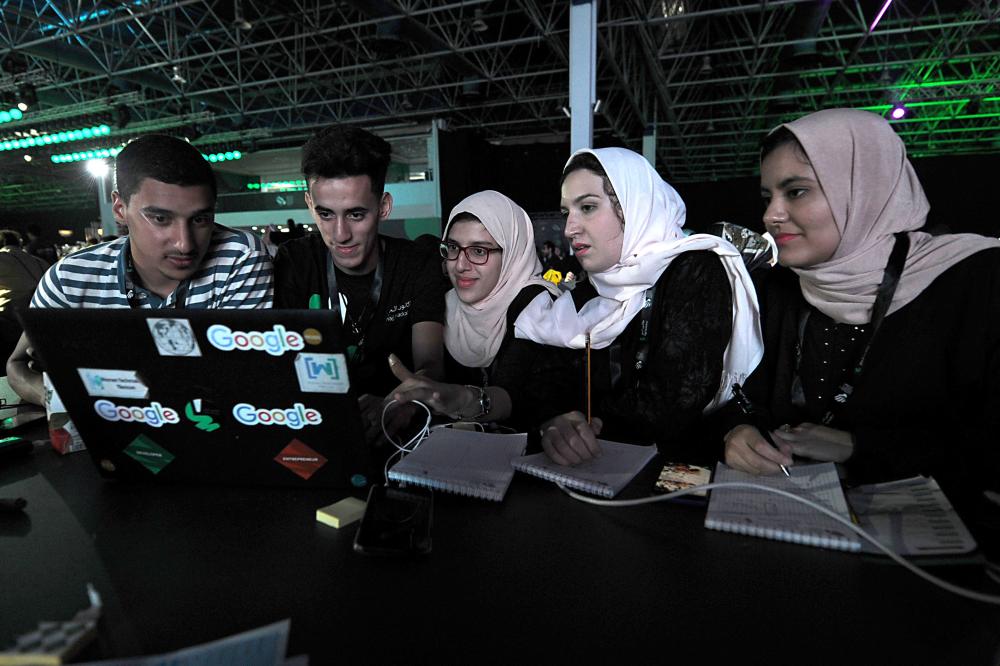 JEDDAH — Saudi Arabia is currently hosting the largest Hackathon in the Middle East with the participation of thousands of developers and innovators from more than 100 countries during a three-day event at the International Exhibitions and Conventions Center in Jeddah. Organized by the Saudi Federation for Cybersecurity, Programming and Drones, the event was formally inaugurated by its chairman and adviser at the Royal Court Saud Al-Qahtani on Tuesday. Among the prominent figures who participated in several discussion panels on the opening day were Minister of Communications and Information Technology Abdullah Amer Al-Sawah; Jimmy Wales, founder of Wikipedia; Steve Wozniak, co-founder of Apple; Abdulrahman Tarabzouni, CEO and MD of STV; and Abdulrahman Bin Mutrib, executive vice president of Al-Tayyar. During his talk, Wales said he was honored to be part of such an event and happy to see the large crowd of innovators in attendance. The main theme of his talk was about the key to being successful, which he said was knowing “it is okay to fail”. “This event is one of the most important things for a country that has great ambition to become the gateway to technology in the Middle East,” he said. Wales added that one of the smart things about the effectiveness of this event was that it centered on improving the experience of millions of pilgrims through ideas and innovation. The cyber federation organized the Hajj Hackathon to continue the efforts of Saudi Arabia to serve the guests of God and take advantage of the young talents, while highlighting women’s participation in the exploration and development of Haj technology. The federation said it aims to attract leading minds in the field of programming to innovate technology solutions that contribute to enriching and improving pilgrims’ experience. Wozniak, Apple’s co-founder, has said success is not about imitating others but about innovation and the creation and development of ideas, and that for private enterprise to succeed, "you have to work hard and you must love what you do.” “You must have motivation, inspiration that you are going to have a product that’s going to help change people’s lives, give them a better life, give them easier lives,” Wozniak said. The first edition of “Hackathon of Hajj” attracted developers from many countries, including the Kingdom and the Gulf states. More than 20,000 people were registered and 3,000 of them have been selected to participate. Google has supported the event and has held several workshops for participants. The cyber federation has allocated prizes for this event and funding for projects amounting to SR2 million, in order to transform participants’ ideas into actual projects. The prize was divided into three: the first place is SR1 million, while the second winner receives SR500,000 and the third SR350,000, while SR150,000 goes for excellence. Competition in the event includes the sectors surrounding the Haj season, its services and challenges, including food and beverages, public health, financial solutions, transportation, crowd management, traffic control, travel and accommodation arrangements, waste and waste management, housing and communication solutions. The opening ceremony included a dialogue session entitled “Saudi Arabia, the emerging technology portal.” Speaking at the opening of session, Nouf Al-Rakan, CEO of the cyber federation, said for the Kingdom "the sky is the limit in terms of the quality of service being provided to the pilgrims". She called on programmers to be part of "this ambitious transformation". Esam Al-Thukair, vice governor for entrepreneurship at Monsha’at, said they were allocating 20 seats for the best developers at their incubators to support small and medium enterprises. The General Authority for Small and Medium Enterprises (Monsha’at) is taking part in the Hackathon along with the Saudi Federation for Cyber Security, Programming and Drones. Monsha’at has licensed 34 incubators in the Kingdom and it is working on innovation centers that offer solutions to reduce costs and expand production. They also introduce innovative programs for data analysis, artificial intelligence and the internet of things.