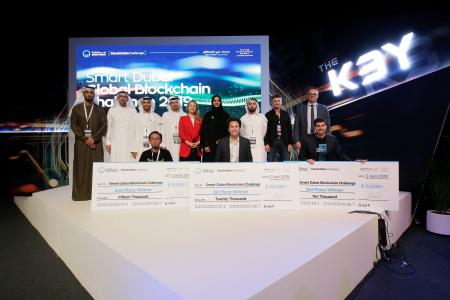 Nations must not allow regulation to stifle innovation if they want to drive the adoption and advancement of blockchain.

That was the view of a keynote power-panel of leading international experts in the opening seminar on Day Two of the 2019 Future Blockchain Summit, held at Dubai World Trade Centre.

Sharing their combined international and governmental expertise, the five-some dissected the topic of blockchain regulation and legislation, probing current examples from around the world and examining how and where similar regulatory proposals should be implemented.

While they agreed that regulation has to be considered, the panel were resolute in affirming that any such legislature must not come at the expense of pushing the technology forward.

McClarkin said: “We can’t keep up as policy-makers with the pace of the revolution happening with technology. If you over regulate too soon, then there’s no flexibility left for these new innovations to come. However, we have to be mindful in monitoring where it’s going so we can understand where it can find a solution that can help us – but we must choose the right moment to do that.

“We don’t want to restrict blockchain at this stage because the potential is huge. We are only a few years into this digital revolution and as policy-makers we need to be educated and monitoring it, but allowing for that innovation.”

Abdalla echoed that view, saying: “Innovation is the most important thing. Blockchain is disrupting and redefining a lot of the concepts that we are used to, from value to the concept of identities. We need to allow this innovative process to grow and prosper, but at the same time be responsible, and make sure that any potential misuse of this technology will definitely be impeded or stopped.”

Tayara was part of the team behind du’s City of the Future, an incredible gamified blockchain experience launched at Future Blockchain Summit on Tuesday, and the first of its kind anywhere in the world.

He concluded the panel, saying: “Innovate, innovate, innovate – don’t wait for a framework, keep pushing the boundaries and don’t be afraid of failing. That’s the direction we’re going and we can’t slow down.”

The man considered by many as the founding father of video games firmly believes in blockchain as being the new backbone of gaming.

Nolan Bushnell, American electrical engineer and businessman - and most notably, co-founder of Atari - shared his views during a keynote speech at Dubai’s Future Blockchain Summit. In 2012, he founded an educational software company called Brainrush that is using video game technology in educational software. He now sees its future on the blockchain.

He explained: “If your parents aren’t giving you money, and you’re 12-years-old and want to go to a movie, there is no legal way for you to get money. I believe that we can do something better for kids today. Brainrush is a set of software programs that generate tokens on completion of different lessons. With this software, I believe that we can change the nature of education by paying kids to learn.”

“When it comes to gaming and digital goods, billions of dollars are being spent on electronic fashion. People want to look good when dressing their avatar. People want to own real estate in a mythical world. All of these things, once put on the blockchain, can now become tradeable.”

Bushnell touched on the phenomenons Fortnight and Trivia HQ, two of the most popular online games in the world right now, the latter of which attracts 500,000 people twice a day to play via mobile phones for real cash prizes. He said: “What if these two games have a baby? The baby would be a game called ‘X to riches’ - a treasure hunting game where when you find the treasure, you get to keep it.

“We think that we are going to have somewhere between a half a million to a million players playing this game. Of those players, half of them are going to be winning something. But how do I reward 200,000 payers instantaneously without being hacked? That’s where blockchain comes in. We will create a crypto wallet and all we have to do is electronically transfer digital goods into the crypto-wallets. Fast, secure, untouched by human hands.”

He concluded: “With this technology, we have a tremendous opportunity for new kinds of games, new ways to monetise those games, and to have a secure and robust marketplace for digital goods, game currencies, and most importantly, fun. So, when you wonder about why we are doing blockchain? For me, it’s so that games can get better, and that’s why I’m here.”

With all the blockchain hype and industry disruption it could cause, it is no surprise that large firms are looking at investing in the sector as they seek to apply the technology in their own operations.

A group of international experts from across industries including energy, aviation, transportation and pharmaceuticals unanimously agreed that while they are looking to invest in blockchain in enhancing overall customer experiences, it is important to consider what business impact it can bring - and, more importantly, how that impact can be measured.

Dale Chrystie, Blockchain Strategist at FedEx, said that it is important for companies to be selective of the products and projects they are getting involved into, adding: “In the last several years, people have been envisioning the wonderful promise the technology can bring, so we had to fight hard to change that notion and stay focused on what business opportunities blockchain can bring and how we can continue to support and bring value to our customers.”

Amna Al Redha, Accelerator Manager, Innovation Division at Emirates Airline, agreed. She said: “Blockchain should make sense to your business. The technology is fantastic and interesting, but not every single problem can be solved with blockchain. Companies need to focus on the business impact it can bring such as solving customer problems, what are the outcomes and how they can be measured.”

Lisa Lambert, Chief Technology and Innovation Officer with the National Grid, said that companies view blockchain as an equivalent to security. “Being able to have a platform that you can trust and rely upon is important,” she said, urging investors to look at blockchain products that are different and scalable when investing. Dr. Emmanuel Fombu, Global Commercial Strategy and Digital Innovation, Johnson & Johnson, said he would look for companies that would support the idea of data ownership, saying: “We are looking at companies that can extract data from wearables and have it linked to records from hospitals.”

The winners of the third edition of the Smart Dubai Blockchain Challenge - one of the world’s leading global blockchain startup contests - were announced at the Future Blockchain Summit today, coming out on top of a competition that drew an incredible 700+ entries from 79 countries.

Quantstamp - a smart-contract security company from the US - took top spot, winning US$20,000 in prize money. Indonesian agriculture startup iGrow Chain came in second, winning US$15,000; while Grayblock - a blockchain financial services and development company from Canada - placed third, taking home US$10,000.

Smart Dubai’s Director General H.E. Dr Aisha Bint Butti Bin Bishr said: “Now in its third edition, the Global Blockchain Challenge has seen remarkable improvement in the quality and creativity of the submitted projects, which, coupled with the surge in the overall number of applications, clearly underlines its global appeal, as well as the increased appetite for blockchain technology as a whole.

“This initiative cements Dubai’s status as a world leader in this advanced sector, and reflects our wise leadership’s commitment to empowering entrepreneurs to put innovative technologies at people’s service in Dubai, establishing the emirate as a full-fledged smart city.”

“We are absolutely thrilled to bag first place at the Smart Dubai Blockchain Challenge,” said Don Ho, winner Quantstamp’s Head of Business Development. “For us, our vision is to truly see the world run on smart contracts. As a result, we really want to usher their mainstream adoption and what better place than to be here, where we can showcase the technology on a global stage.”

He continued: “Dubai is an extremely impressive and innovative place when it comes to Blockchain applications. We have offices all over the world, but we haven’t seen a place like Dubai where the government is leading the technology and its adoption.”