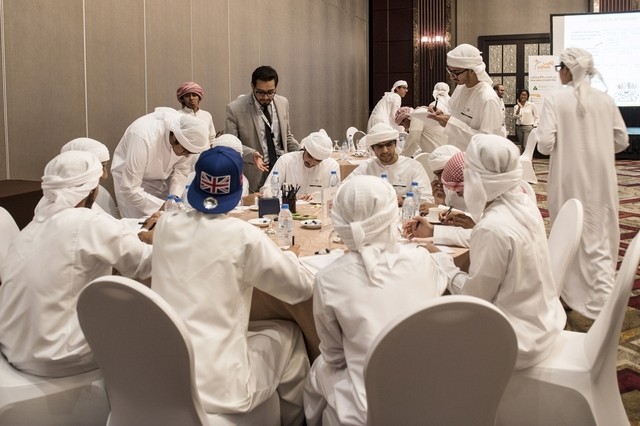 If they get their way, the next generation of Emirati innovators might end up producing sustainable energy by farming electric eels or programming drones to take tourists on guided tours around Sir Bani Yas Island.

The eels and the drones were two of eight business ideas created by 60 male Emirati high school students at an Innovation Day Camp (I-Camp) in Abu Dhabi recently – one of several business-themed camps held in the past year and attended by more than 2,000 male and female students between 15 and 18.

The I-Camps are part of "Zaheb", an initiative aimed at developing workforce readiness among Emirati youth, led by Agthia food and beverage company, and in partnership with Injaz, a business education non-profit organisation.

"The I-Camp introduces the concept of entrepreneurship to these kids, and they actually experience it for themselves through different steps," says Maha Al Adhami," Injaz UAE’s programme manager and the trainer charged with shaping the young business minds.

At each session, the youngsters are split into groups of seven and assigned to a volunteer mentor from the private sector.

"The fact we have volunteers from the real world of business is what makes this special," says Ms Al Adhami. "They have to work on business challenges together and come up with solutions. It’s all about empowering Emirati youth so that, inshallah, they will be super-inspired to open up their own business one day."

Ali Hamad, 15, from Al Ittihad National Private School in Abu Dhabi, helped his group come up with the idea of a "tour-guide drone" linked to an app, which would provide information to tourists as it leads them around the holiday island of Sir Bani Yas.

"We didn’t think Sir Bani Yas Island was so well known with tourists yet," Ali says. "We figured the drone would generate publicity, which would help to advertise the island around the world. The drone concept is eco-friendly because it reduces footfall, so it doesn’t trample over the environment as it shows people around. You’re replacing tour guides with drones, which can understand multiple languages."

The drone technology that inspired the group’s idea is something the teenagers are familiar with; three of Ali ’s group of seven already have their own drones at home. "I can see how a lot of the business ideas of the future will come from drones," he says. "They’re easy to work with, eco-friendly and not too expensive to run."

The students come from a range of schools, so another challenge is learning to interact with peers from different social groups.

"I learnt today that it’s not a big deal if I don’t know the people around me," says Ali. "I can work in teams with anyone in the community."

To break the ice, Ms Al Adhami starts the morning with a game of bingo, which involves the boys writing down their skill sets. "As the day goes on, the energy increases and by the end, there’s lots of laughter," she says.

One of the volunteer mentors giving up his Saturday to attend the I-Camp is Syed Aamir, the chief executive and founder of the sustainable education company Indkarta.

He mentors the group discussing the economic potential of providing power from electric eels and he says his reasons for volunteering aren’t entirely altruistic.

"My company is working with most of the schools where these boys are enrolled – like Al Ittihad and Al Bateen Schools," he explains.

"The I-Camp is helping me get to know more students, and find out their thought processes. This assists me in preparing the sustainability workshops I teach."

Mr Aamir adds that it was interesting process as the students had to think beyond their lives as UAE residents.

"In the first 40 minutes, we were able to crack the barrier where they could start thinking outside the cultural box," he says. "It’s about them getting outside their comfort zone and collaborating on something that has absolutely no limits, and building it themselves. The ideas for potential businesses must come from them."

Saif Al Mashgouni, 15, from Abu Dhabi’s American International School, says thinking about how tourists might interpret the country he lives in helped with the creative process. "The activity really opened our eyes to this aspect of the tourism economy," he says.

The previous Saturday, it had been the turn of young Emirati females to put their entrepreneurial thinking caps on.

"The girls always have very creative ideas," says Ms Al Adhami. "One group wanted to upcycle old drinks cans into necklaces. Another had an idea to build mini-supermarkets out at sea, to cater to all the men who go out on their jet skis and get hungry on the water."

Sustainability, Ms Al Adhami notes, is an increasingly popular theme for the students.

"Sometimes as much as half the room come up with ideas that are focused on sustainability," she says. "The UAE has one of the largest carbon footprints in the world and most of the students are aware of that, so they’re trying to help their country."