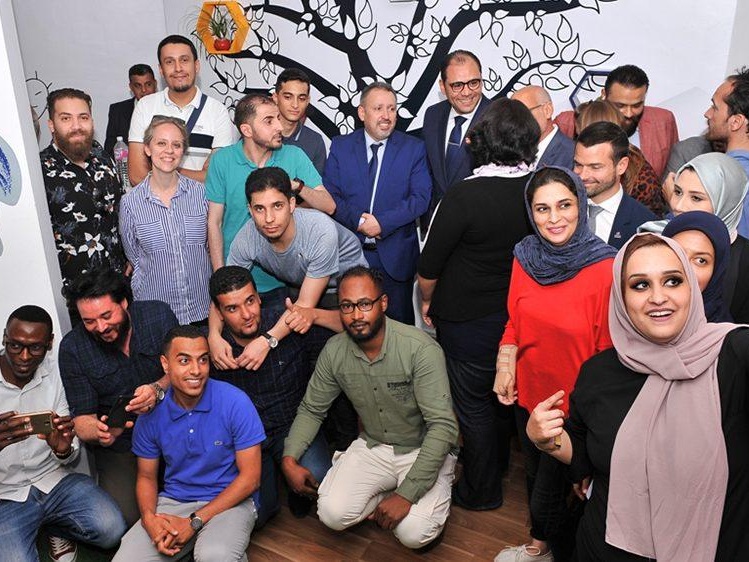 How to raise startup funding in a war-torn economy

After years of war, Libya’s economy often seems to be characterized by what’s missing rather than what’s there. Speak to entrepreneurial Libyans and they’ll often tell you what’s lacking, from reliable electricity to transport networks, experienced management or up-to-date regulations. One businessman sums it up as “a lot of missing encouragement” for startups.

What’s also missing is finance. Simply put, there aren’t many places a young business can go if it wants to raise money.

Moaad Zagzoie, chief executive of local mobile games developer Techneon Group, says local banks will offer credit, but “most are afraid to give loans without guaranteed personal involvement from members in the bank’s management or someone well-known. Most start-ups have to find other means, like local competitions or small grants from accelerators.”

Perhaps the biggest missing element, though, is the lack of peace. Since April 2019, Khalifa Haftar’s Libyan National Army (LNA) has been trying to seize Tripoli from the internationally-recognized Government of National Accord (GNA). A dangerous proxy war has developed, drawing in players from around the region including Turkey and the UAE.

Fighting continues close to the city in early 2020, but for residents the proximity of battle is relative. “The fight is more than 25 kilometers (15 miles) from the center of Tripoli so it’s a really far place from where we are,” says local executive Ahmed Albibas.

In this challenging environment, there is still money available for those who know where to look. Techneon has raised up to 1 million Libyan dinars ($714,000) from a group of local business owners Zagzoie met “through a few personal connections acquired from participating in a local competition.”

He declines to name the backers though. Anonymity is preferred in Libya, where affluent locals stay under the radar for fear of kidnapping or worse. “People with money want to be low profile these days,” says Tariq Benarwin, founder of co-working space 1st Centre, which also runs an investor-entrepreneur matchmaking service. “We have our own networks of businessmen or people who have inherited lots of money and we match them with businesses,” he explains.

Such personal connections are everything. Another young company which managed to navigate this route is iStudy, which has developed an app allowing parents to keep an eye on the progress of their children in school. Its chief executive Zakaria Gwaila turned to friends and family to gather the initial capital to start his business, raising enough for three members of staff for a year.

That’s a typical fundraising method for startups all over the world. The real difficulty in Libya is finding larger, follow-on investments.

Some international assistance is helping to improve the situation, such as the Stream incubator and accelerator, which opened in Tripoli in November. It is backed by the UK government and run by Expertise France—the French public agency for international technical assistance—in partnership with local mobile telecoms company Libyana. It also runs a matchmaking service and offers grants of €5,000 to €9,000 ($5,600 to $10,000).

“For some it will be enough to grow their business,” says Victoria Dussardier, project manager at Stream. “For some who are quite advanced it’s not enough if they want to scale up or go international, so it’s also a way for them to have enough cash to be able to go and find other investors.”

Raising money is made harder by the lack of transparency. “You can’t really know who invested in what,” says Sohaib Sbeta, project manager at another co-working site in Tripoli, Space340.

Techneon used the money it raised to buy new hardware and pay the salaries of the company’s staff for two years, but Zagzoie says he is hoping to raise another $200,000 by the end of 2020 “to hire more people and possibly secure a new office—bigger and better—in Europe.”

The country he is aiming for is Estonia, but securing that money is unlikely to be easy. “Many start-ups are struggling to find investors who are interested in long-term investment,” he says. “What the business environment is lacking is people who are willing to invest in services, new solutions to daily tasks, willing to support anything new.”

Libya’s extreme political challenges have meant local startups haven’t been able to easily capture some of the advantages of being regionally categorized as part of the MENA region (Middle East and North Africa) when it comes to funding.

While startups in Sub-Saharan Africa get decent amount of coverage and input from Silicon Valley and other Western funding centers, North African startups have enjoyed a different geographical advantage.  With backing from wealthy Gulf nations, they are able to access significant funding pools solely dedicated to the MENA region and can expand to and operate in Middle East markets more easily than startups in other African regions.

Libyan business executives say the public perception of entrepreneurs is slowly improving and that may, in time, lead to a greater willingness to lend money to young companies. The situation is being helped by initiatives such as the Sleidse (Support to Libya for Economic Integration, Diversification and Sustainable Development) program, set up by France’s foreign ministry and the European Union.

In its efforts to raise awareness about entrepreneurship, foster small business development and facilitate access to finance, it has organized bootcamps in Tunisia and Libya, set up the Libus online business school and a coding academy. In September, a further €800,000 in funding was announced for Sleidse, adding to the previous €7.8 million.

There is also the €7 million, EU-funded EU4PSL program, which works with government ministries, civil society organizations and credit guarantee funds to improve the business environment. There are ideas for other programs too. “We plan to work on venture capital but, as you might imagine, there are many barriers to that,” says Elsa Berry a spokeswoman for Expertise France. “Libya is not connected to international financial markets. This is a key issue.”

For those right at the beginning of their business plans, some microfinance is also available, backed by funding from the UK and others. Two microfinance agencies have been set up in Tripoli and Benghazi in partnership with Assaray Trade and Investment Bank, which between them have LD15 million ($10.1 million) to channel through to small entrepreneurs.

Funding isn’t the only problem for entrepreneurs though. The World Bank reckons that only four other countries have a less welcoming business environment. Basic services like power and decent wifi can be hard to come by and personal safety is a constant consideration. But for businesses which can raise funding, those conditions also mean they might not face many rivals.

“Competition is pretty low,” says Benarwin. “There are lots of services that don’t exist. If you start a business the chances of succeeding are very high, especially if it’s a new idea.”

How to raise startup funding in a war-torn economy