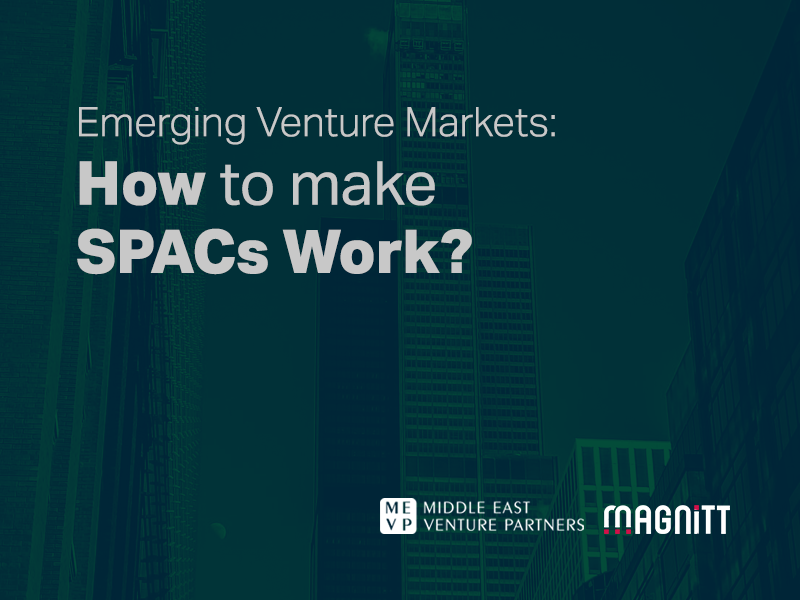 HOW to make SPACS WORK

Back in 2012, one particular Tech startup launched in Lebanon as an early adopter of a Tech-integrated and AI-driven music streaming platform. Almost 10 years of scaling and expansion later, Anghami becomes the first Tech company in MENA to list on NASDAQ. Many aspects of this story could be studied as the ideal startup journey, where Anghami checked all the marks of a Hero venture from its initial $1.3M investment by Middle East Venture Partners (MEVP) to its IPO exit. What’s particularly interesting, however, is the mechanism through which this Exit was possible, a SPAC merger that unlocked the real potential of this MENA-based startup.

We’ve been hearing about SPAC mergers a lot recently as they become more sought after by startups in Emerging Venture Markets. Even though Special Purpose Acquisition Companies or SPACs have been existent in different capacities for a long time, circumstantial, infrastructural, and financial drivers brought this model to the forefront in the past few years.

As this year’s historic 2 NASDAQ listings, amongst a record-breaking number of MENA exits, were driven by SPAC mergers, we team up with MEVP to explore the relevance and potential of this exit strategy for Later-Stage startups in Emerging Venture Markets:

A SPAC is a blank cheque company that is formed solely for the purpose of listing on a stock exchange, usually an internationally traded one. SPAC is more of a mechanism in that sense, where its main function is derived only by merging with a ‘Target’ company seeking to list on the stock exchange- a process that involves multiple stakeholders across different levels of the value chain.

SPACs are formed by ‘Sponsors’ or an initial group of investors who invest in the company’s pool of funds in return for a free percentage of its shares when listed. Usually, sponsors keep 20% of the public shares, which positions as a great lucrative incentive for investors, yet a potential risk for the startups. After raising investments and selling shares through an Initial Public Offering (IPO), a SPAC selects the Target company it wishes to acquire, where the full process is complete after a Merger.

Sponsors seek to raise additional investments from external or in-network investors during acquisition, referred to as PIPE (Private Investment in Public Equity), in order to back up the acquisition and boost the target startup’s ‘Growth Capital’. Here, PIPE is key to a successful SPAC exit strategy, especially in Emerging Venture Markets which we will elaborate on later on.

SPAC for Startups in EVM

The most obvious attraction to SPAC by startups in Emerging Venture Markets is the chance to list on an international stock exchange which opens up immense scaling opportunities. However, as we move to more comprehensive readings on the real impact investors can create for their startups, we notice that SPAC is a highly favorable growth exit strategy for startups equipped and ready to go public.

Being one of the leading facilitators of the historic Anghami SPAC merger, MEVP’s Managing Partner and Chief Exit Officer Rabih Khoury stressed the importance of the Growth Capital aspect of SPAC. Rabih shares his insights “Startups should show in their business plan large opportunities for growth because the SPAC listing can deliver all the growth capital needed. So bold growth plans are required. The business/sector of the SPAC has to solve a global pain point. Narrow local business plans will not suffice and will not appeal to Global and US-based investors.”

As Rabih explains, SPACs are IPO alternatives, hence startups wishing to merge with a SPAC should be IPO-ready, which includes: being at a mature stage and in the case of MENA-based startups a regional player, having a $150M+ valuation as the minimum size for a SPAC IPO is $100M, and finally having a strong financial team with a Big 4 Auditor and solid business processes. In MENA, there is very little technology IPO activity because of fragmented capital markets and small equity exchanges with little liquidity, even though MENA  has the conducive elements to create large digital businesses such as Anghami, Careem, Kitopi, or Souq. The essence of SPAC here, as Khoury shares, is giving EVM startups access to a larger pool of funds that can drive their growth to become a Tech Market Leader, a vision shared by MEVP itself.

PIPE as a Key Local Driver

This year was critical as we observed the first 2 SPAC mergers and public listings by MENA-based Tech startup Anghami, and MENA’s first publicly listed Unicorn Swvl. Both acquisitions were accompanied by a PIPE, which Rabih Khoury believes is one of the vital elements for a successful SPAC acquisition.

Queen’s Gambit Growth Capital’s acquisition of Egypt-based Swvl valued at $1.5Bn, was accompanied by equally major private investment in public equity from Luxor Capital, Zain Group, and Agility Ventures estimated at $100M. Similarly, Anghami’s merger with Vistas Media Company valued at $180M was matched with a $40M underwritten investment from Shuaa Capital and the SPAC sponsors themselves. The virtue of these PIPE investments lies in their financing capabilities and most importantly their function as a safety net.

As Rabih explains the $40M PIPE covered the minimum exit requirement for Anghami, which safeguards from share redemption by US-based or Global investors, which is something that generally occurs as the major US investors might get deterred by unfamiliar ecosystems and markets in MENA. In this case, having a PIPE raised locally will be a key insurer of liquidity in the startup’s growth capital.  “The PIPE becomes the real growth capital provider for a successful SPAC merger. The PIPE will also be raised locally, in the region of the Startup, so there will be more local appeal for a regional Startup champion.”

HOW to make SPACS WORK