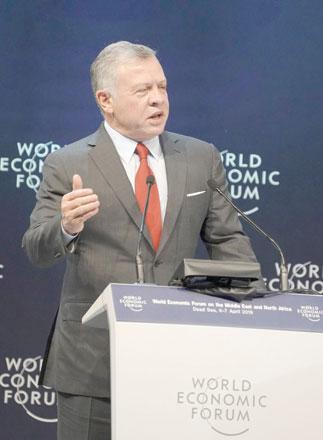 His Majesty King Abdullah said Saturday that Jordan’s most important strength is its high-skill human capital, adding that the Jordanian youth are proven assets to every enterprise.

“Our young people are globally connected, tech savvy, fluent in multiple languages and determined to succeed. They are proven assets to every enterprise. And we have already seen this strength at work, in the success of Jordan’s ICT industry, which has created thousands of new jobs and accessed markets across the region and beyond,” the King said in his address at the opening of the 17th World Economic Forum (WEF) on the Middle East and North Africa in the presence of Her Majesty Queen Rania and HRH Crown Prince Hussein.

His Majesty stressed that a national focus on education and innovation has helped nurture an ecosystem of entrepreneurship and start-ups, helping the Kingdom lead the way in creative, youth-oriented sectors.

“And the same sectors that benefit from our people’s strong skill-sets also open doors to the good jobs they need and expect. And let me say, women are a critical part of our economic future, and we are expanding every avenue to success,” the King said in the address at the event, which attracted more than 1,000 leaders of government, business, civil society, faith and academia from more than 50 countries.

The forum, which will run through April 7th, is the 10th WEF meeting to be held in Jordan and the 17th in the region.

Noting that Jordan’s economic situation is promising, King Abdullah said: “We are also looking towards the growth that comes with abundant, real opportunity; Jordan’s economic situation is promising. Indeed, the recent London initiative was a timely vote of confidence in our strong and resilient country and our sound approach.”

To grow opportunities faster, Jordan is making a priority of economic sectors that offer high growth potential and multiple openings for investment, the King told the forum.

“Now these will take advantage of our country’s distinctive economic strengths, including our many FTAs [free trade agreements] and strong trade ties, linking us to more than a billion consumers worldwide,” the King said.

“We are also harnessing our rich resources of clean, renewable energy. Indeed, by next year, we expect one-fifth of our energy will be generated through renewables,” he added.

Highlighting tourism as one of Jordan’s most promising service sectors, the King noted rising numbers of foreign visitors to Jordan.

“They know and trust our welcoming, secure country, and they are drawn to our many and diverse destinations.”

“Tourism is only one area of growth. Others include professional services, business-process outsourcing, social-media marketing, app development and more,” he added.

Jordan has achieved successes in spite of several challenges, the King said.

“Our economy has faced significant challenges over the past decade. In doing the right thing for desperate refugees, Jordan’s own people have paid an enormous price, and we are working closely with international partners to increase help for refugees and host communities alike,” His Majesty said.

He added that Jordan is actively supporting the growth of opportunity.

“Now, across all sectors, reforms are under way to support and foster a healthy business climate. We will continue to back innovation and enterprise — from start-ups to the global leaders that have made us a base. And above all, we are listening to you, about what is needed for opportunity to flourish,” said King Abdullah.

Stressing that the forum tackles some of the most important issues affecting our region, the King said: “The more than 300 million people of our region provide a talent pool eager to compete on a global level, and a huge marketplace of consumers and businesses.”

“And for every investment in this region’s great opportunities, for every investment that creates jobs for our young people, and helps families bring good pay home, our economies grow and opportunities redouble. That’s a benefit for us, but it is also a benefit for others, because what happens in our region impacts the entire world,” His Majesty noted.

The King added that it takes a broad partnership to create a platform for economic growth — private sector investment and productivity at every level, including small and medium enterprises; public sectors that support business confidence and economic success; as well as global partners to flow investments into positive futures.

Addressing the forum, UN Secretary General António Guterres said Jordan has demonstrated exceptional generosity to people fleeing conflict and upheaval in Palestine, Syria and elsewhere, with an enormous impact on Jordan’s economy and society, adding that the event builds on other gatherings that took place earlier this year in London and Brussels, which marked the start of a new partnership approach between Jordan and the international community in pursuit of sustainable growth and self-reliance.

“In light of the pressures on the country, Jordan deserves strong solidarity from the international community… But let me also stress the bigger picture and brighter narrative: Beyond the impacts linked to the Syrian crisis, the Israeli-Palestine conflict, Jordan is also a country with large investment opportunities for private sector-led growth,” Guterres said.

Jordan remains a fundamental pillar of regional stability, and UN agencies are actively supporting the country’s determined efforts to achieve the Sustainable Development Goals and Jordan is a leading contributor to United Nations peacekeeping, with hundreds of troops and police in several operations, “another vital generous contribution”, Guterres added.

Jordan was also the driving force behind a landmark Security Council resolution on youth that highlighted the importance of including the voices of young people in our work for peace, the UN chief said, noting that with its own large and dynamic youth population, and with the right support, “Jordan is poised to reap a demographic dividend”.

The UN is deeply engaged in a surge of diplomacy for peace to untie the Gordian knot of conflict and instability, he added.

“Resolving the region’s conflicts is an imperative — including the two-state solution, with Israel and Palestine living side by side in peace with secure and recognised borders, and with Jerusalem as capital of the two countries,” he added.

It is crucial to look at the Middle East and North Africa not only as an area of conflict, but as a region of opportunities, Guterres told the gathering.

“With smart approaches internally and support from the international community, we can unleash remarkable dynamism and capacity,” he said.

World Economic Forum Founder and Executive Chairman Professor Klaus Schwab said in his address at the event that Jordan finds itself, together with many others in the region, “facing the formidable gravitational forces of the ongoing fragility from across its borders”.

“The resilience of the Jordanian people in the face of this challenge is truly exceptional and it is imperative on all of us in the region and internationally that we step up urgently and without delay in addressing these perennial threats and finally enable a region of peace and prosperity — something its great people fully deserve,” Schwab said.