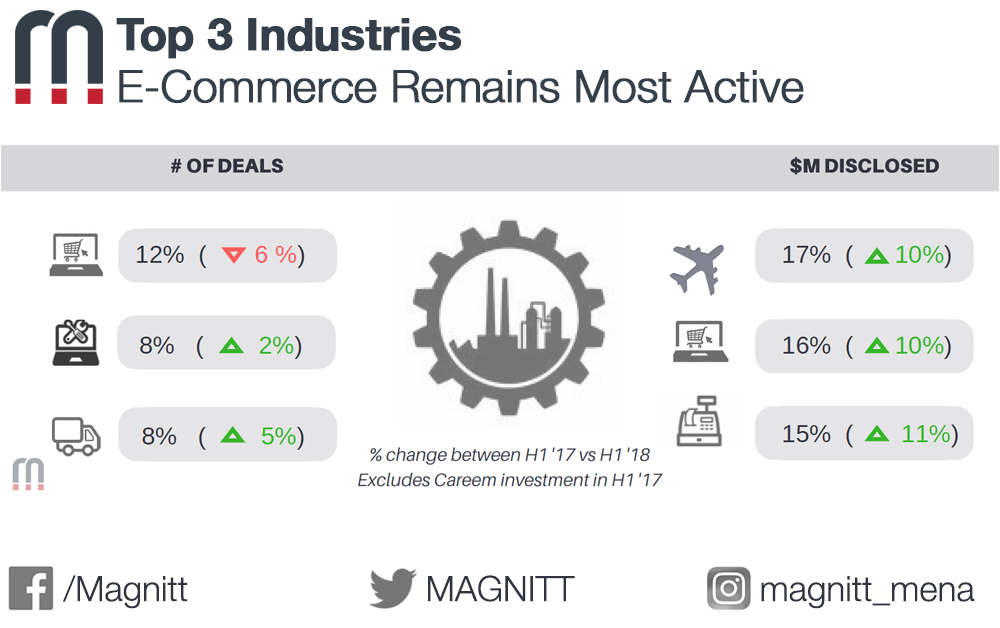 Since MENA has seen a technology boom in various sectors, the region has established itself as one of the fastest growing e-commerce markets in the world. The sector dominated the deal flow in the region with 17 deals taking place. In fact, a Series A, $13.6M funding from Quick Manage FZ LLC to e-commerce startup, Alawooz, ranked amongst the top deals. E-commerce also accounted for 12% of all transactions made and represented 16% of disclosed funding of which Brantu, La Reina Exchange, CarSwitch and Eyewa, were part.

The industry also led in undisclosed funding, mainly due to Mumzworld’s Series B investment round being undisclosed. By making more and more headlines such as Noon launching a grocery delivery service and the industry heading into a pivotal moment as activity accelerates, the e-commerce market in the region is expected to double to $69bn by 2020.

The region has also demonstrated a high growth potential for startups in the Delivery and Logistics industry, with more and more startups forming in the sector in response to hyper-local needs. Startups in the industry have created innovations in the region and attracted investors, having received a total of $75M in funding in 2017. Some of the deals in the Delivery and Logistics industry include a $50K funding in TruKKer from Arzan VC and The Riyad Taqnia Fund (RTF), as well as a $13K funding in Wasel Lee.