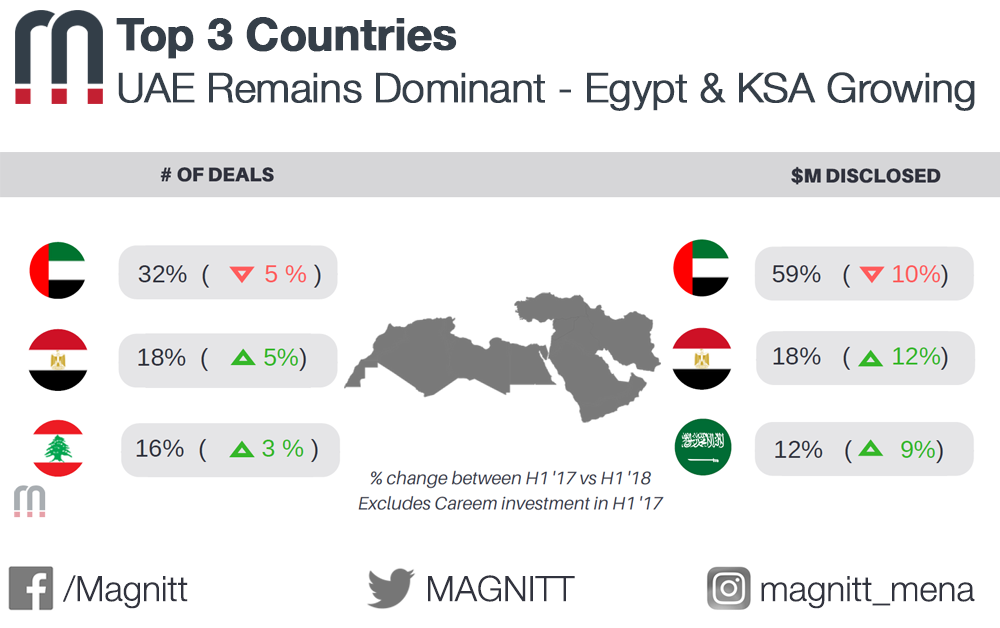 During the first 6 months of 2018, several countries in the Middle East and North Africa, including Egypt, Lebanon and Saudi Arabia, have been achieving startup growth in terms of increased number of deals. With multiple countries climbing up in the rankings,  the first half of 2018 saw an increase of 15 deals compared to the first half of 2017. Still, the UAE remains the leading startup ecosystem in MENA as it has the highest number of deals, 32% to be exact, of all 141 deals occurring in the UAE alone.

The UAE, MENA’s regional startup hub,  houses more than 40% of startups in the Middle East and North Africa. With high-value startups like Careem and Souq originating from the UAE, a multitude of incubators and investors have been attracted to invest in the country, allowing the UAE to retain the highest number of deals and disclosed investments in the first half of 2018. A UAE-based insurance technology company, Aqeed, received the highest disclosed investment amount of all disclosed deals in the first half of 2018, totaling to $18M. As a result, Aqeed, along with Alawooz, HolidayMe, MaisonPrive and Arkin Technologies, ranked among the top 10 funding rounds in MENA in H1 2018.

However, funding rounds was not the only aspect that the UAE led in in the MENA. In the first half of 2018, a wave of startup exits also occurred in the UAE. In fact, 7 out of 9 exits that took place in H1 included UAE-based startups. Some exits include RoundMenu, an online food ordering platform, which got acquired by Careem, the UAE-based ride-hailing app, as well as Expat Wheels and WeCashAnyCar, who got acquired by Dubizzle.

MAGNiTT’s H1 2018 report has revealed that the once nascent Egyptian ecosystem has started to pick up momentum with growing governmental and institutional support to SMEs in Egypt – the country came in second place in number of deals in the first half of 2018, with 22 deals taking place. Significant budget allocations include IFC’s efforts to fund Egypt’s private sector and the Egypt Parliament’s sovereign wealth fund to support local startups. By collectively injecting capital into the growth of startups, many were able to set up shop and continue to grow in Egypt with an increased ability to respond to various hyper-local needs such as healthcare and transportation with startups like Vezeeta, an automated physician, clinic and hospital booking platform, and Swvl,  a bus transportation network, who received $8M in disclosed deals.

With the rise of more startups, investors, accelerators and enablers over the past few years, Lebanon has risen steadily in the ranks, positioning 3rd in number of deals in the first half of 2018, with 16% of deals taking place in Lebanon, a 3% increase from H1 2017. Some deals that have contributed to the notable emergence of the Lebanese startup ecosystem include a $500K Series A funding round in data analytics startup Neumann, a $420K SEED stage funding round in consumer services startup Moodfit, and a $500K SEED funding round in Spike.

With increased financing opportunities from newly founded firms in the region, more and more funding opportunities are arising in the Saudi startup ecosystem, and SMEs are moving away from their dependency on friends and family to provide for their startups. Because of an increase in funding institutions,  the GCC’s biggest market has seen a surge of investments with the KSA seeing $14M in disclosed investments in the first half of 2018, more than double the amount that was invested into Saudi-based startups in the first half of 2017.

Some funding rounds that included Saudi-based startups include Telfaz11, an entertainment production and distribution network based in Riyadh, that was ranked among the top 10 disclosed deals, having received $9M in a Series A funding round from STV, VentureSouq, Hala Ventures and Badir. Other deals that took place amongst Saudi-based startups in the first half of 2018 include Resal, Mathaqi, Wasel Lee and Quetta.com.

With a growing startup ecosystem in the Middle East and North Africa, more and more investors, accelerators and enablers are participating in deals region-wide, specifically in the UAE, Egypt, Lebanon and Saudi Arabia.