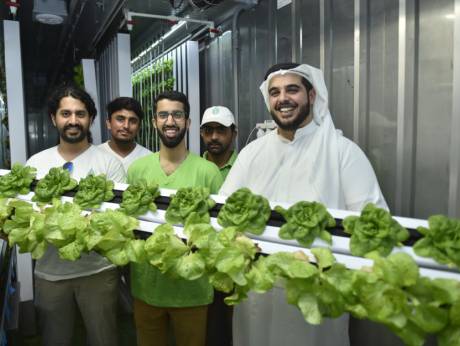 The Arab world struggles to feed its population. In the Gulf Cooperation Council (GCC) nations, arable lands accounts for just 1 per cent of the total land, yet agriculture and irrigation use more than 50 per cent of the water supply. And still the GCC imports 90 per cent of its food.

“I think we all know that we have a problem here in the region,” said Madar Farms co-founder and CEO Abdul Aziz Al Mulla. “But I think the scale and imminence of the problem is what really scared me. Over the last 20 years we’ve lost the majority of our water resources.

“We’re not talking about a problem that’s going to hit us now. We’re talking about in 10 years, 20 years. But at the same time intervention is so large scale and takes such a large period of time to actually convert that I felt a very strong need that something had to be done now. Something at a large scale.”

Ultimately, the start-up, which began operations in February, wants to build a fully automated robotic hydroponics farm. Right now, it’s operating three units built into re-used 40-foot shipping containers at its headquarters in Warsan 3, near Dubai Municipality’s nursery, and is on its fourth harvest.

Container hydroponics isn’t a new development, Al Mulla is quick to point out. It’s already been used successfully in other parts of the world.

“We always tell people there’s no magic in hydroponics,” said Al Mulla, a Kuwaiti entrepreneur who began getting interested in food security while working for consultancy McKinsey. “Everyone thinks it’s some kind of new technology. It’s not. It’s all the same, It’s just the delivery mechanism and it’s how accessible you make it that’s the differentiating factor.”

What’s new is combining container hydroponics with a mobile app that maximises efficiency by monitoring crop growth and advising workers in necessary tasks to ensure consistent growth and maximum yield. It will also help Madar monitor and manage hundreds of containers — among their retail models are options for customers to have Madar maintain containers for them, or to store and manage them. The app will be produced in English, Arabic, Hindi, Urdu and Tagalog.

Combining the two allows Madar to grow crops using less than 1 per cent of the water used in traditional methods, and do to so in a manner that makes the process easy and consistent. At the moment they’re concentrating on producing leafy greens such as lettuce, cabbage, herbs, and intend to add legumes and berries in the near future.

Come September, Madar will begin distributing units to customers; they already have orders to carry them through to year-end.

Each container will sell for between $85,000 and $95,000, depending on requirements (Madar is still refining the assembly process to bring costs down). Al Mulla estimates return on investment for each container at between four and seven years, depending on the cost of electricity.

The containers have considerable power requirements, which form a significant proportion of operating costs.

But Al Mulla is clear the containers are a stepping stone to a larger platform; they help increase awareness of the method and build the market, but will not solve the problem he is concerned with.

“When we talk about food security, which is our long-term aim, you have to produce a quantity of food, but the right mixture of food of high quality to feed and entire population. That’s our long-term goal and it’s what we’re going to get to. Growing leafy greens isn’t going to get us there.”

Madar’s next phase is a large-scale automated hydroponics factory. They intend to break ground in the third quarter of 2018.

“We take out the labour aspect completely. This automates using robots for transplanting, harvesting and packaging in a 40,000 square foot plant where we can grow 3,000 kilogrammes a day.”

That too is small scale compared to the target if food security for the region, but Al Mulla envisages a chain of plants, producing not only leafy greens but wheat, root crops and fruit. He’s looking also into automated fish farming.

This is not only a matter of avoiding contamination of the plants, but of standardising the conditions, and the nutrient-laden water flowing through the stone-wool and cotton holders in which the plants grow.

Since there’s no spraying, and fertilisers are delivered through the roots, the sanitised conditions mean the plants can be eaten directly, without washing — something Al Mulla happily demonstrates back in his office as he offers around a pair of freshly harvested lettuces.

In fact, he says, washing the plants actually decreases their cleanliness; tap water is dirtier than they are (though still, of course, perfectly safe).