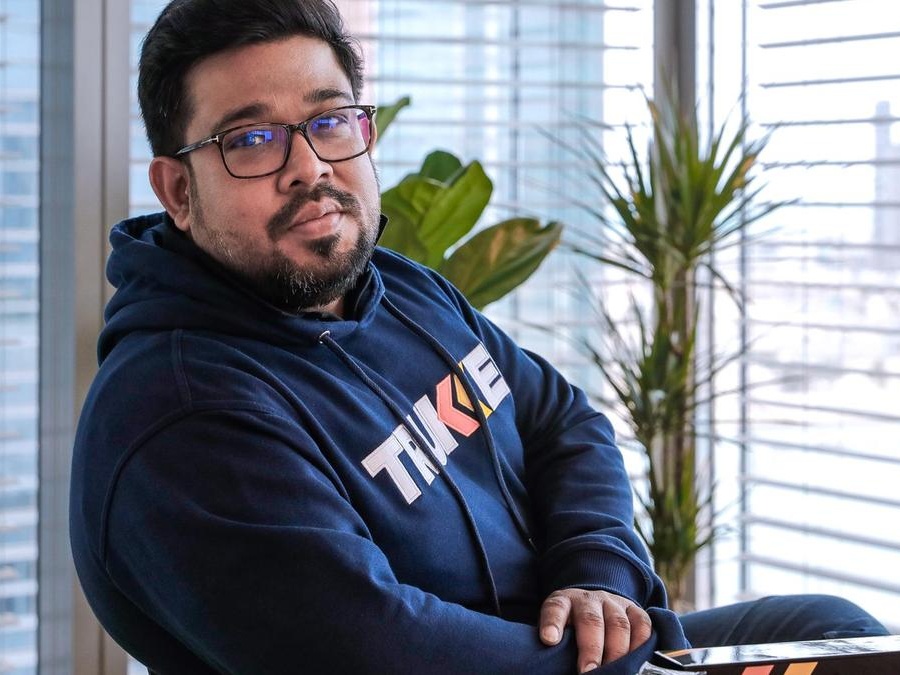 Generation Startup: Trukker has created an 'Uber for trucks' in the Middle East

A lot of people have great ideas while they’re on holiday, lay by the side of a pool or chatting over a meal with friends. Most of us let the moment pass and then drift back into the daily routine, unwilling or unable to risk the security of a regular pay cheque.

But Gaurav Biswas didn’t. The founder of Trukker” was having a good time” working at one of the world’s biggest building consultancy firms, Aecom, where he had been project director of the Yas Mall scheme, and had become one of the youngest directors at the firm at the age of 32.

“If I was at Aecom now I would probably be a VP or looking after a big geography,” he says.

Mr Biswas explains that an idea came when a friend, who had a fertiliser manufacturing business in India was being interrupted during a holiday dinner by an unreliable haulage company, which had agreed to transport nine container loads to a port, but could then no longer hold up its end of the bargain.

"I said, ‘there should be something like an Uber for trucks because there are so many of them lying empty on roadsides and you seem to be struggling’,” Mr Biswas says. “That thought stayed with me for a couple of days.”

He asked an old school friend, Pradeep Mallavarapu, who worked in IT, how difficult it would be to create the technology, and within two months Mr Biswas had quit his job and the pair were hiring an IT team in India to develop their technology, as well as drumming up interest among both drivers and end users in the UAE.

The company started in 2016 by offering home moving services. Mr Biswas explains this was a way of ensuring drivers who used the app had loads to pick up before the company had the chance to build a base of corporate clients.

"Now, it is a very small part of our business — less than 5 per cent,” he says. Trukker has since moved up the chain, offering jobs moving domestic cargo across the UAE, and later into long distance, cross-border cargo.

“Now, that is our biggest product — more than 70 per of our revenue is from long-haul trucking across the GCC,” he said. It also opened a Cairo office earlier this month.

“The business is quite huge. If you think of it as road freight, just road freight within the GCC is a $46bn (Dh169bn) market. We feel our market is going to be Turkey in the North, Iraq in the East, the whole of the GCC and then all the way along North Africa — Egypt, Libya, Tunisia, Algeria and Morocco."

If you add all of those areas up, the rucking market is worth almost $80bn-$90bn, he says.

The co-founders funded the business from their own resources for as long as possible.

“Before I got the first investment from anyone I was down $400,000 of my own money," Mr Biswas says.

Holding out until they needed backers allowed the pair to build something more substantial before giving any equity away. The pair completed a seed round at the end of 2017 before closing a $23 million Series A round led by Saudi Technology Ventures in November. Other participants included the International Finance Corporation, Middle East Venture Partners, Riyad Taqnia Fund, the Oman Technology Fund, Iliad Partners, Shorooq Ventures and Endeavour Catalyst Fund.

“We invest in entrepreneurs who understand their industry inside out, and that is exactly what Gaurav and Pradeep have," said Ahmad AlNaimi, principal of STV's $500m technology fund. "We are inspired by their vision to become the de-facto platform for the MENA logistics industry, and we are very proud to support them in this journey.”

To date, Trukker has raised a total of about $26m, Mr Biswas says.

Their app averages about 1,000-1,200 transactions per day, most of which are in the UAE and Saudi Arabia. But the additional funding is being used to facilitate a geographical push which includes its new Egypt base, and it is in the final stages of registering its business in Bahrain and Oman.

“Our target is by the end of the first quarter of 2020, we will be in all of the GCC countries except Qatar, and we’ll also be live in Jordan and Egypt.”

The road haulage business was “ripe for aggregation” through an app such as Trukker because 85 per cent of the trucks on the road are run by one-man bands, Mr Biswas explains. He cites figures from Saudi Arabia’s Public Transport Authority, which says there are about 1.3 million trucks on the kingdom’s roads.

“The biggest fleet owner has something like 2,500 trucks. So you can imagine how fragmented the supply side is.”

The offer of regular jobs and guaranteed cash payments has attracted drivers to the app, and the ability for companies requiring haulage services to see how reliable drivers are and for work to be carried out at competitive rates, has allowed it to attract companies of all sizes, including multinationals like Unilever and Procter & Gamble. There are now more than 15,000 member trucks and 200 clients using the app.

The company, which is based in offices at Abu Dhabi Global Market Square, is also looking to boost its team as it grows. Mr Biswas himself is moving his family to Saudi Arabia to help develop its team and its operations in the kingdom.

“I think Saudi Arabia is at an inflection point. I’m there every other week. And I see a lot of what Dubai was when I moved here from the UK [in 2008],” he says. “Many, many projects — a lot of optimism ... there is a lot going on there."

- What other successful start-up do you wish you’d started?

Google, for sure. If I have to buy a stock for my daughter, I would definitely buy Google. The amount of data that they have on each and every one of us that lives on planet earth…

- What new skills have you learnt since launching Trukker?

Digital marketing is a small one, but … my biggest responsibility in Trukker is decision-making,

- If you could do it all differently, what would you change?

I would have definitely gone to hire more senior guys earlier than I did. A few of my ace team right now are young and doing big things for this group. But I think I would have burned myself [out] less if I’d hired senior guys sooner.

- Where do you see Trukker in five years?

If we grow to be an average company we will definitely be a local champion in the Middle East and North Africa region, including Turkey. And if we end up being the ace company that we are so far then we will probably be into a wider geography including Eastern Europe, possibly Pakistan and/or India.

Generation Startup: Trukker has created an 'Uber for trucks' in the Middle East