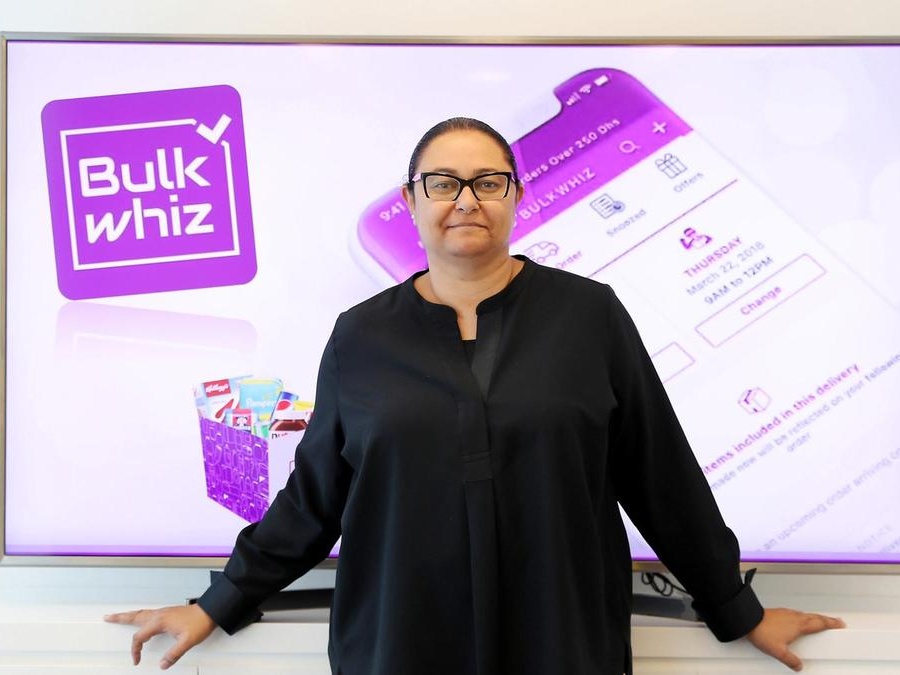 BulkWhiz offers two things in high demand at the moment, as the coronavirus outbreak dominates headlines: grocery shopping without leaving home and bulk quantities at a discount.

In fact, the Dubai-based online platform founded three years ago has experienced a “strong surge in sales to the tune of 70 to 100 per cent as people stock up”, says chief executive Amira Rashad. Cart sizes have grown by 50 per cent in both number of items and value, and the start-up has acquired 1,500 new customers in the last month, Ms Rashad adds.

But the journey of BulkWhiz started much earlier. When Ms Rashad cofounded the e-commerce site in February 2017, it took about a year to sign up 1,000 households and then it was “hockey stick” growth from there, she says.

More than 32,000 UAE homes have made a purchase on the site, which has witnessed an average of 30 per cent month-on-month growth over the last couple of years.

BulkWhiz blends the concept of Costco — a major US retailer that sells bulk quantities of merchandise at a discount to its club members — with an AI-enabled platform that personalises the grocery shopping experience using predictive patterns.

There are many factors that make the Middle East the ideal place for the BulkWhiz model, including large families, consumer demand for convenience and a tech-savvy population. What is even more lucrative is the “white space” of opportunity, says Ms Rashad, both in the lack of online grocery options and bulk supply options.

“When you actually look at the size of the prize [of grocery spend], you’re talking about a third of household disposable income — it’s massive. It’s $175 billion (Dh643bn) in Mena alone,” she says.

While 58 per cent of consumers in the region prefer to shop at large supermarkets, about 30 per cent are ordering groceries through a mobile app or website, according to the Online Grocery Retail in Mena March 2019 report from Wamda Capital. The e-groceries market is currently worth $200 million in the GCC and Egypt, “accounting for less than 1 per cent of the e-commerce space and so there is room for rapid growth”, the report says.

As BulkWhiz increases its customer base, it continues to raise funds and develop its home-grown technology. The start-up closed its series A funding in October, bringing the total to approximately $6m, with investors such as Beco Capital and the Women’s Angel Investor Network (Wain) in the UAE, China’s MSA Capital and 500 Startups. Next month it plans to open an office at Abu Dhabi’s Hub71, where it will base a data science and machine learning team.

It is also eyeing expansion beyond the UAE. It has secured its license from the Saudi Arabian General Investment Authority (Sagia) and plans to launch there by the end of this year. The goal is to then expand to other GCC countries and perhaps further afield. “We’re definitely building for scale,” Ms Rashad says.

Heather Henyon, founder and director of Wain, says they were “one of the first investors to invest in BulkWhiz because of our belief in the founders … and the large scalable market opportunity. As busy women, we could relate to the problem that BulkWhiz is solving.”

The inspiration for BulkWhiz started when Ms Rashad, an Egyptian-American, moved to Dubai from New York in 2010 and “literally had physical withdrawal symptoms from not having Costco here”. She was also a working mum who felt “forever irked by the fact that I have to waste my time grocery shopping”.

The Harvard Business School graduate, who had worked as a Booz Allen Hamilton consultant and held senior strategy positions at several US firms, kept the idea in the back of her mind. It was when she started working at Yahoo in Dubai, followed by Facebook, that she became more familiar with the dynamics of e-commerce in the region.

“Back then there was just one player, there was Souq,” says Ms Rashad. Souq, which was acquired by Amazon in 2017 for $580m and has since become amazon.ae, mainly sells electronics and fashion on its site.

If people are buying in those categories, it tends to be infrequent and in small quantities, whereas with groceries it’s “52 times a year and there’s 50-odd items on the list”. If the goal is to save time, money and effort, “the last thing I want to do as a user is go to a site that has every single thing under the sun, search and get a million different results”.

Ms Rashad set out with her quest to build a bulk grocery delivery platform in 2016 — but knew the key differentiator would be technology. She began her search for a chief technology officer and found the ideal candidate: Yusuf Saber, data science lead at Careem at the time, who had a master’s degree in data science from Harvard and another in machine learning from ETH Zurich.

By February 2017, Ms Rashad had brought on Mr Saber as a co-founder, as well as two other co-founders: her brother, Mahmoud Sayedahmed, a consultant who had over 20 years of marketing experience with major multinationals; and Reda Bouraoui, who had spent over 15 years at Pepsi in sales and management roles. They both hold advisory roles with BulkWhiz, while Mr Saber finally came on board full-time as CTO at the end of last year.

BulkWhiz has built its own proprietary AI technology to make it easier for users to buy groceries online. The prices drop as a customer increases the quantity of a product in their cart. The buy again page allows users to easily add items they’ve purchased in previous orders.

“There are very interesting predictable patterns and there’s a huge, huge opportunity for personalisation,” Ms Rashad says. “And once you do that, the propensity to switch disappears.”

The second important differentiator, Ms Rashad says, is customer service. BulkWhiz allows free delivery and free returns, and assigns a dedicated “Customer Whiz” to each household. “It’s well worth it. It more than pays for itself, both in terms of acquisition and retention,” she says.

BulkWhiz, which delivers its products from a 5,000 square foot (464 square metre) warehouse in Al Quoz, has the added benefit of saving on expensive real estate — a key reason why hypermarkets don’t waste valuable shelf space with bulk options.

As for competition, Ms Rashad says, “It’s mine to lose really at this point, because it’s such a white space that there’s every opportunity to carve a value proposition today and maintain it.”

What already successful start-up do you wish you had started?

Facebook. There are no COGS (costs of goods sold) at Facebook; you’re basically selling connections. So the economics are fantastic.

What have you learnt in the process of launching your start-up?

You have to will it. And it’s all about execution. I hear people saying things like, ‘I have this great idea’. That’s wonderful, but it’s all about getting it done.

What’s your next big dream to make happen?

I want to see us do two things. I want to see us develop home-grown AI technology in this part of the world that actually gets exported elsewhere, that has either value for other start-ups or in other markets. This part of the world is all about me-too, copy-cat types of models in many cases. And there’s nothing wrong with that, but there is no original technology. I think there’s an opportunity for that, especially for emerging markets.

The other is the concept of the trade marketing platform, which is something we’re working on. When you look at Amazon’s business, it was pretty much plain vanilla e-commerce. And then when they got to scale, they went to other businesses, they went to the cloud computing market. And now, for the very first time, they’re either head-to-head or winning against ad giants like Facebook and Google. They’re selling advertising.

Because we own our last mile and we have this longer term relationship with users, they share a lot of stuff with us. We know that, for example, you live in a villa, not an apartment. Or you have a dog. There are certain things we can use to actually personalise that experience. You may not want a Pampers sample, for example, or milk if you’re lactose intolerant.

What would be a big milestone for BulkWhiz?

Becoming a regional player would be the first big milestone, where we’re operating in three, four, five different markets, and able to scale our model across all of those markets. Because that’s a different animal altogether.

Last year, Egypt saw more deals, funding, investors and exits than ever before! Are you interested in keeping up with the story of one of MENA’s hottest startup ecosystems? Purchase our 2019 Egypt Venture Investment Report HERE