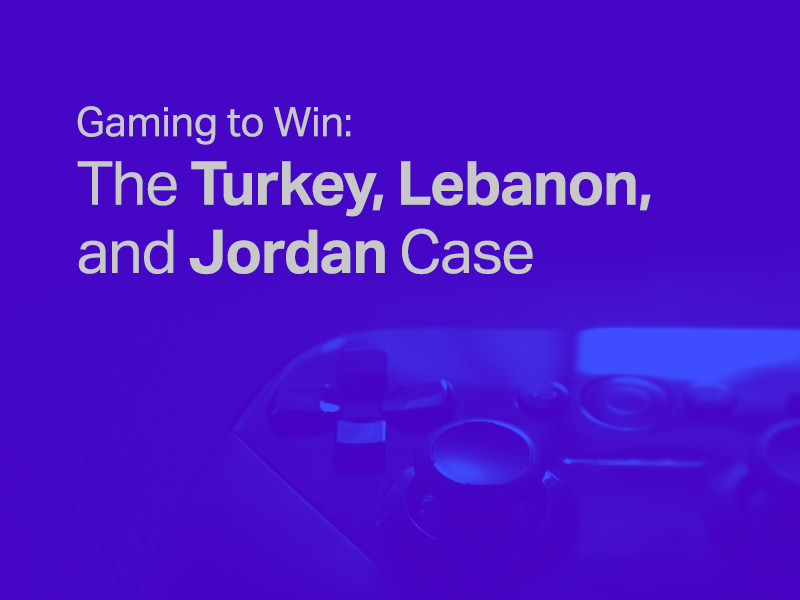 Gaming to Win: The Turkey, Lebanon, and Jordan Case

If you’re keeping up with the ecosystem in Emerging Venture Markets, especially in regions like Turkey, then gaming would have made grand appearances on your radar throughout the year. Gaming as an industry and as a medium, unleashed the imaginative prowess of both startups and gamers alike, creating new avenues for the next generation of Tech from AR/VR to visual mapping and micro-processing intricacies. With the rise of E-sports as a multi-billion dollar global industry, the Gaming industry is starting to show it’s weight as a lucrative and exciting venture space globally, and surely in our Emerging Venture Markets.

The gaming industry has been particularly booming in Turkey and the Middle East, 2 venture spaces that share many similarities and have been observing a record-breaking year. In the Middle East, Lebanon and Jordan rank on top of the most active gaming ecosystems even though only Jordan closed 1 deal in 2021. The most interesting aspect about these two gaming ecosystems, however, is that they remain one of the very few industries that observed growth in funding during the pandemic. Turkey on the other hand observed its big break in 2021, where Turkey-based gaming startups closed 6x more deals in 2021 than in 2020 marking a new yearly record for the industry.

We explore some pivotal moments in these 3 geographies and how 2021 shifted startup dynamics on macro and micro levels:

Gaming seems to have come a long way for investors, with funding rounds dating back to 2016 where Turkey-based gaming startups raised their second-highest record of 6 deals. What’s particularly striking about this ecosystem is the impact of investment in Early Stage deals over the years creating a solid foreground for the major breakthrough in 2021. At a gradual growth rate, the gaming ecosystem closed 3 deals in 2017 & 2018 and 7 deals in 2019 & 2020, where all 20 deals were invested in Early-Stage rounds (Pre-Seed, Seed, and Pre-Series A).

In 2021, everything changed for the Turkish gaming industry as it observed a 7,004% YoY growth in funding along with the emergence of its first-ever Series A (5) and Series B (1) rounds. Beyond the impressive maturity of the ecosystem, emerging with its first-ever Megadeal in a $155M Series B round raised by Dream Games in 2021, Early-Stage deals still accounted for more than 70% of all deals raised this year- perhaps setting the stage for yet another record-breaking year in 2022.

In a rather conservative VC activity as compared to peer industries in the same geography or star ecosystems like Turkey, Lebanon & Jordan have been championing the gaming industry in the Middle East with a wide array of Gaming studios, Streaming platforms, and Gaming technology. Similar to the Turkish ecosystem, investment backing gaming startups has been gradual and early-stage focused in the two geographies, even though fluctuating in congruence with the dips and peaks of overall investment across industries. The highest yearly record of 4 transactions across both geographies was recorded in 2015, 2017, 2018, and 2020 with 2018 recording the highest amount of funding raised by the gaming industry closed at $6.7M.

Similar to Turkey, the gaming ecosystem across Lebanon and Jordan leveled up in 2021. Despite closing only 1 round, where the Jordan-based streaming platform Bith.TV raised $205K in a SEED round backed by Beyond Capital and Oasis 500, 2021 recorded the ecosystem’s first exits. Completely shifting the dynamics and boosting the prospects of gaming startups across the two geographies, the Lebanese-based streaming platform Rawa.TV and Jordan-based card gaming studio Jawaker marked their exits. After gradual growth in growing their streaming services, Rawa.TV gets acquired by US-based gaming content and clip-sharing platform Medal.TV; the strategic acquisition aims to integrate Rawa.TV’s full Tech-Stack to offer live streaming features on Medal.TV, proving the innovative acumen of the Lebanese team. In a sudden twist of fate, Jawaker’s platform heavily picked up in 2020 during the pandemic, with hundreds of thousands of players downloading Jawaker games. This set the stage for their grand exit; spotting this major breakthrough, the global gaming studio Stillfront Group acquires the Jordan-based startup for a stellar $205M.

Gaming to Win: The Turkey, Lebanon, and Jordan Case