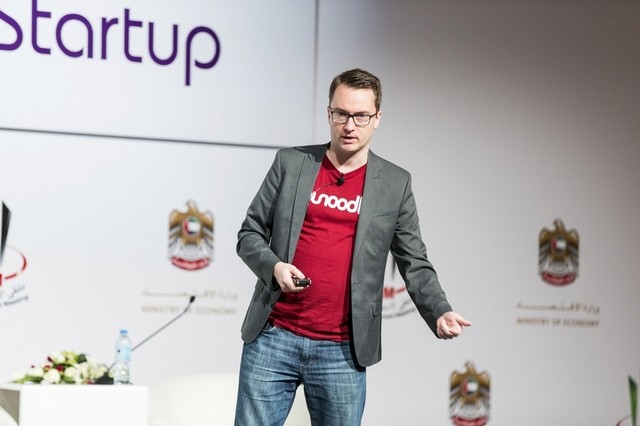 The best thing that governments in the region can do to foster the growth of start-ups is not to build more incubators, but to provide access to markets and facilitate the growth of liquid capital markets, according to one expert.

Torsten Kolind, the founder of Younoodle – a site that hosts global start-up competitions – said that founders need to persevere through difficult challenges to survive, and those that are incubated often fail once they are exposed to "the real market outside".

Speaking to The National on the sideline of the AIM Start Ups event held alongside the Annual Investment Meeting in Dubai, Mr Kolind said that a common complaint among local start-ups he has spoken to is a difficulty in gaining access to buyers from government and major corporations.

"Very often, big companies and governments are looking at each other and ignoring all of the smaller companies, which deprives us of exactly that market opportunity that they need to break through.

"If governments said just 2 per cent of our budgets every year is going to have to be spent on start-ups, just imagine what change that would be. [They’d] have to set up a way to find those start-ups, talk to them and understand what they do."

Mr Kolind said that start-ups were vital for economic growth, citing research from the Kauffman Foundation which showed that they are not only responsible for net new growth of 2 million jobs a year in the US, but also the replacement of a further 1 million jobs lost from firms that go bust.

He also noted the ability of some start-ups to grow stratospherically, citing the example of Instagram – a business that was a start-up in the same building as Younoodle when both firms began in 2010, but was sold for US$1 billion to Facebook three years later when it had just 12 employees.

He insisted that modern tools such as cloud computing have levelled the playing field in terms of start-up development.

"I am of the belief that Silicon Valley is a state of mind. We don’t have to create the next Silicon Valley necessarily here in the UAE. It’s as much about looking at what we have here already – the assets, the opportunities and the talent we have and then creating our own version."

Sabah Al Binali, a serial investor into businesses in the region (and a columnist for The National), told the conference that an obsession with the Silicon Valley idea of building businesses with huge valuations within very short periods is unrealistic.

"This idea that I’ve created a company and two years later I’m going to find 20 people to give me $1bn for it … that’s not going to happen. Over here, businesses take time to build."

He said that his own investment, Zawya, which was sold to Thomson Reuters in 2012, took 11 years, and he noted that Souq.com took 12 years before last week’s sale to Amazon.com.

"Amazon did not value Souq.com because it was an online retailer. It has an online facade. They bought it for fulfilment. Building those operations is the value."