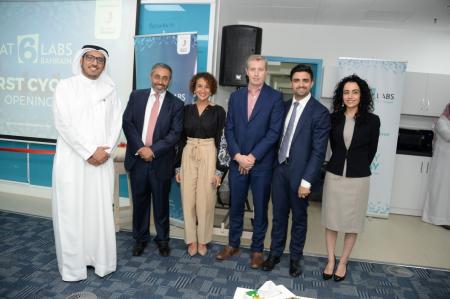 Flat6Labs Bahrain Officially Opens its Doors at NBB Towers, as Eight Startups Gear Up for the First Cycle

Manama, Bahrain — Flat6Labs Bahrain, supported by Tamkeen (Labour Fund), launches their Bahrain office, joining an ever-growing lineup of successful locations across the MENA region. The new premises, located on the 15th floor of the  National Bank of Bahrain (NBB) towers, will serve as both a workspace to Flat6Lab’s entrepreneurs, as well as a hub  for Bahrain’s startup ecosystem where developer group meetups and presentations will be held.

“The opening of our Bahrain office serves as a key destination for bringing together partners from across all fields to interact, support and assist in the evolution of startups. Our state of the art office space has been designed to encourage and facilitate interaction and productivity, giving startups the opportunity to work dynamically side by side with others,” said Ramez El-Serafy, CEO of Flat6Labs.

“Tamkeen plays a vital role in boosting Bahrain’s startup ecosystem by providing solutions to the obstacles that are faced by startups. We are glad to have signed and funded the establishment with three international accelerators including Flat6Labs.”

“As the world moves towards significant economic transformation, with new needs and different obstacles, Tamkeen is committed to meet the demands of a new market”

“Accelerators are currently playing an active role in supporting startups and creating clearer perception of potential growth and opportunities available to businesses. We believe with the establishment of these accelerators in Bahrain, we are bridging a gap that will transform Bahrain’s Economy.

“We have witnessed the successful experience of Flat6 Lab in many countries and we look forward to bringing the best practices to Bahrain and offer Bahraini entrepreneurs the maximum support possible,” Dr Janahi added.

‘As one of the most notable accelerators in the MENA region, Flat6Labs’ official launch, in cooperation with Tamkeen will prove to be a key asset to the startup scene in the Kingdom. The launch will generate a host of opportunities for entrepreneurs to initiate and expand their operations in the region, and will position Bahrain as an ideal startup platform; a crucial development, since  startups, today, are the driving force  of our economy.’

Following its official launch and first call for applications earlier this year, Flat6Labs Bahrain has accepted eight startups after receiving over 150 applications from more than 30 countries for their inaugural cycle.

The eight startups represent multiple sectors, including education, ecommerce, gaming, hospitality, healthcare, and more. The startups will each receive US$30K in cash seed funding, along with a host of perks, and will embark on a 16-week mentorship-driven accelerator program to transform their ideas into investment-ready companies.

At the end of every cycle a Demo Day will be held, where graduating companies showcase their startups to a host of investors, media representatives, and partners offering startups the opportunity to secure further funding.

Flat6Labs aims to utilize its expansive regional network to attract innovative entrepreneurs from Bahrain, the region, and beyond to provide Bahrain’s innovation economy and venture capital industry with a steady pipeline of high-impact entrepreneurs, equipped with well-developed concepts.

Flat6Labs Bahrain is poised to support and invest in over 40 local and international startups and entrepreneurs through their successful acceleration model, developed in association with Tamkeen.

Through its newly established program, Flat6Labs Bahrain aims to cultivate a dynamic, sustainable entrepreneurship environment and investment vehicle, as well as support job creation, alleviate the pressure of the public sector, and help position Bahrain as an innovation leader in the Arabian Gulf region and MENA at large.

Flat6Labs Bahrain Officially Opens its Doors at NBB Towers, as Eight Startups Gear Up for the First Cycle