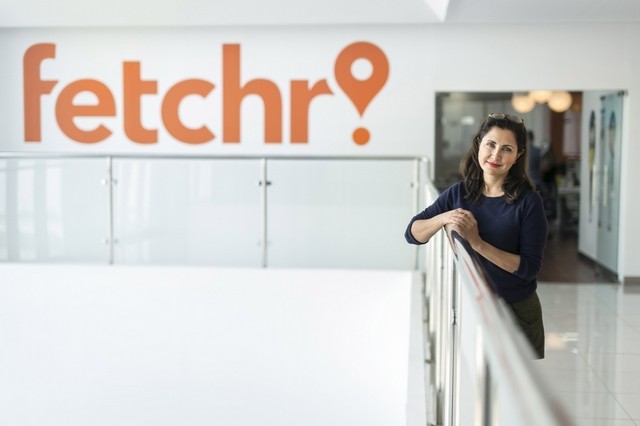 For e-commerce companies in the Middle East, it is the million- dollar question. How do you ensure a package actually reaches the customer – especially when there is no formal delivery address?

While messed-up deliveries in other parts of the world are a headache, and often involve customers having the inconvenience of visiting a parcel depot, here it can make the difference between a completed sale or excess costs.

“We don’t consider a sale to be complete until we find you,” explains Faraz Khalid, co-founder and managing director of the online clothes retailer Namshi.com. “It’s almost a part of our sales process.”

Now a new app offering the enticing prospect of massively improved delivery rates for e-commerce firms, and a more reliable service for consumers, has led to its developer being able to raise US$11 million in early-stage funding from venture capitalists (VCs) in Silicon Valley.

The app is Fetchr, and the co-founder of the Dubai-based business, Joy Ajlouny, says the money raised is the biggest amount in “Series A” funding by any firm in the region. Fetchr uses the GPS coordinates from a consumer’s phone to allow local retailers and e-commerce firms to more accurately track down customers.

Co-founder and chief executive Idriss Al Rifai says the company has a delivery completion rate of about 98 per cent and in built-up areas it is accurate to a range of around five to 10 metres.

Both of the firm’s founders have experienced the frustrations that e-commerce firms face in getting products to customers in the region.

Ms Ajlouny, who was raised in the US by Palestinian parents, founded Bonfaire – an e-commerce venture in the US that specialised in luxury footwear. It was eventually acquired by Moda Operandi in 2013.

“In the US, e-commerce is stagnant and it’s hard to maintain the attention of consumers. So part of my marketing strategy was to reach out to emerging markets – especially the Middle East,” she says.

She adds that order sizes from the region tended to be higher than average – from $1,000 to $5,000 – yet despite using some of the world’s biggest shipping companies many parcels were returned.

“I looked at the boxes coming back and saw ‘no address’. At that point I realised there were no addresses in the Middle East.”

Meanwhile, Mr Al Rifai, who was born in Iraq and raised in France, had experienced a similar problem as head of operations of the Dubai-based e-commerce company Markavip. He later left to work with a team of engineers to develop the technology behind Fetchr.

The pair met while Mr Al Rifai was pitching to VCs in Silicon Valley.

“It completely resonated with me,” says Ms Ajlouny.

With the app free to download, the firm envisages making most of its money from e-commerce providers and retailers such as Jumbo Electronics organising deliveries.

However, it also offers services for individuals who can just take a photo of the item they want shipped and indicate a time (within a 30-minute window of their choice) for it to be picked up.

Its eventual plan is to be an aggregator between couriers and customers, but it has been using its own fleet of vans in Dubai to prove the technology works and that couriers can cut down on delivery times thanks to improved accuracy. Mr Al Rifai says speed is of the essence with cash on delivery items, as the longer delivery takes the more likely it is a customer will change their mind and refuse to pay.

Rasheed Mohammed, category manager at the online retailer Aido.com in Dubai, says 60 to 70 per cent of its deliveries require a cash payment and that finding a customer’s address is not as big a problem as making sure they are there when the package arrives, or that couriers deliver to them on time.

“It’s only in the coordination that it becomes a hassle,” he says. “But any service that helps customers to identify where their product is, or can let companies know they have got it, will always be a benefit,” he says.

Mr Khalid agrees. Namshi has built its own fulfilment service over the past three years, which has given it the opportunity to offer additional services such as doorstep trials for clothes.

“A lot of people talk about the lack of addresses, but if you speak to bike couriers they will say that the address is not the problem,” he says.

More accurate mapping and geolocation devices have made the searches for premises easier, but this doesn’t help a driver delivering to a business with hundreds of employees inside and no concierge, Mr Khalid points out.

“But we’ve told all of our courier partners that the UAE is easy,” he adds. “The Saudi market is the one that has to be cracked. For anyone who does, they can build a billion-dollar company.”