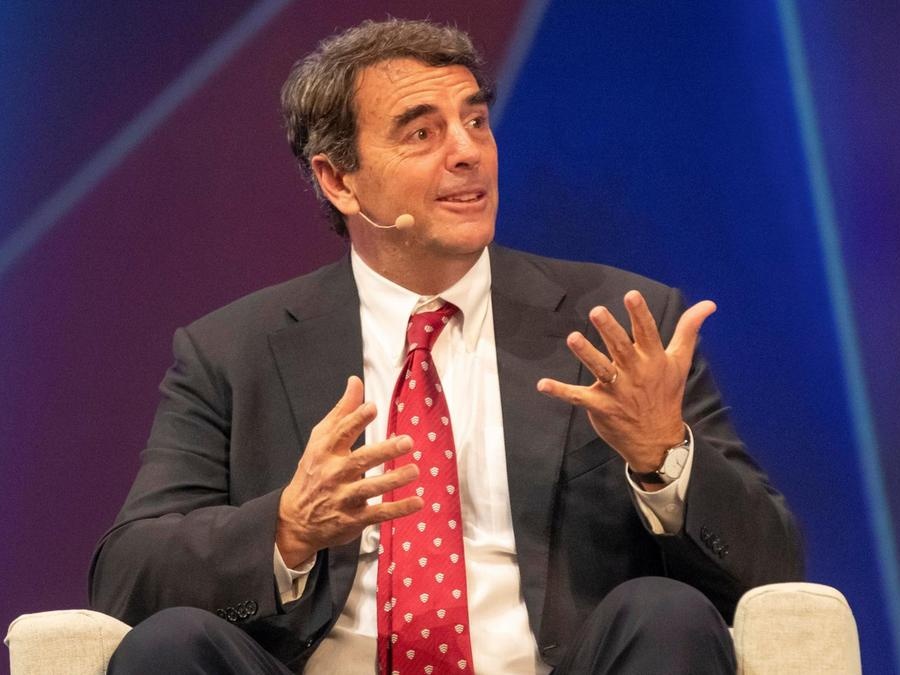 In his 35 years in venture capital, the billionaire has been successful in the search for ‘fat unicorns’, with investments in Baidu, Skype and Tesla

Silicon Valley legend Tim Draper, who founded his venture capital firm in 1985, went through the internet boom and crash, invested early on in China and became one of the first proponents of Bitcoin.

Among the billionaire’s most prominent investments through former firm Draper Fisher Jurvetson were Hotmail in 1996, Chinese technology giant Baidu in 2001 and Skype in 2004. Those early bets paid off: Microsoft bought Hotmail in 1997 for an estimated $400 million (Dh1.47bn); Baidu is now one of the largest internet companies in the world with a market cap of approximately $50 billion; and Skype was bought out first by eBay for $2.6bn and then by Microsoft for $8.5bn.

“It’s great to have someone here in the region because it has this feeling of change. And when you have a feeling of change, you can create unicorns — or what we call 'rhinos', which are fat unicorns,” Mr Draper says. “We think that this is really one of those times and one of those places where there’s so much change happening that entrepreneurship is really going to thrive.”

The Middle East’s only unicorn — a privately-owned start-up valued at over $1bn — has been ride hailing company Careem, which was bought by Uber for $3.1bn. But the deal has been a catalyst for investment and excitement for start-ups in the region. The Middle East and North Africa’s venture capital scene could see $1bn worth of investments in 2020, a new report from start-up data platform Magnitt found. The number of deals in 2019 increased by 31 per cent to 564 with a total value of $704m.

“From the outside, it feels like the Middle East has not changed, but when you come and visit you see that there’s this whole undercurrent of people who are saying hey, there’s something I can do — I can go start a business, it can become successful,” Mr Draper, 61, tells The National.

Mr Draper says the “opening up” of countries, such as Saudi Arabia, will also have a positive impact on entrepreneurship. About 120 students from the kingdom have attended Draper University, an entrepreneurship programme founded by Mr Draper in 2012.

He says it will take time to build the ecosystem. “You’re not going to become Silicon Valley overnight,” he says. “China took 30 years. Silicon Valley took 60 years.” But he says the Middle East can thrive because it can “leapfrog” educational systems and technological advances.

“You’re way ahead from a technological standpoint from where China was when they were getting started with their entrepreneurial ecosystem,” Mr Draper says.

In general, now “is the best time to be either an entrepreneur or a venture capitalist”, says Mr Draper.

“I saw the internet boom and I saw how it changed a number of different interesting industries: media, communications, hotels and taxis,” he says. “But now, all of a sudden, there are these new technologies … blockchain, quantum computing. They’re all going to start transforming industries that are 10 to 100 times bigger than what was transformed by the internet.”

He says there is potential for wider adoption by women, who account for 80 per cent of retail spending but only one of every 15 Bitcoin wallets. “You put those two things together with one other fact, which is: every time you swipe your credit card, you’re giving 2.5 to 4 per cent of your money to the banks,” he says.

Forbes estimated Mr Draper’s crypto net worth in 2018 at $350m to $500m, although he disputes that estimate. Meanwhile, his prediction that Bitcoin will multiply to $250,000 remains to be seen, but he says “it’s going according to plan”.

“I actually believe that in the long-term people will want a global, open, transparent and frictionless currency. You put those four things together, you are going to win,” he says.

Is there anything that Mr Draper got wrong in his career?

The first was Netflix, which started in 1997 as a flat rate DVD rental-by-mail to customers in the US. Co-founder Reed Hastings told Mr Draper the method was meant to build the customer base. “I didn’t understand that … I blew it and missed Netflix,” Mr Draper says.

“The second one I blew was LinkedIn,” Mr Draper says. “At the time — this was the top of the dotcom boom — my email was flooded. And I was thinking, I don’t want anyone to be connected — I’m already way too connected. I was so wrong.”

Mr Draper also turned down Google after meeting with founder Larry Page on a plane, unconvinced that the company could stand out when “there were already six search engines”.

He was encouraged to bid on Facebook by his daughter, who was 13 at the time and “just loved it”. The negotiations started at $20m, doubled to $40m and doubled again to $80m. At $115m, Mr Draper pulled out.