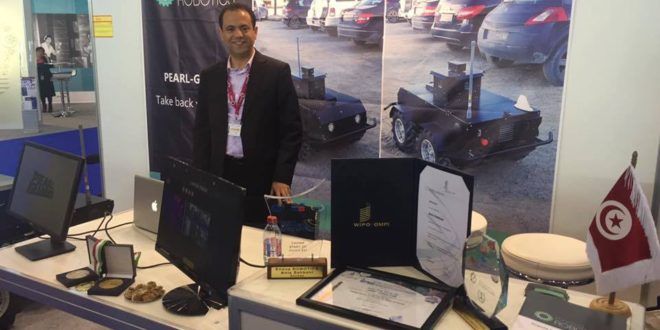 Enova Robotics Achieves Biggest Fundraising For A Startup In Tunisia

Enova Robotics, the only manufacturer of smart robots in Africa and the Arab world, has completed a fundraising of around 4.5 million dinars, which is the most important fundraising event carried out by a Startup in Tunisia.

Enova Robotics Founder Anis Sahbani told media that its Startup is now moving towards a decisive phase of industrialization by creating a French entity Enova Robotics.

He was a lecturer at Sorbonne University in robotics and head of the most important research laboratory on robotics, then converted into an entrepreneur. He said that his future challenge will be to achieve a turnover of 25 million euros.

In 2014, when he started his entrepreneurial adventure, with an amount of 50,000 dinars from his own funds and, thanks to the entry of Optima Sicar in the capital of the Startup, this sum amounted to 100 thousand dinars.

In January 2015, Anis Sahbani decided to make a turning point by buying the Optima Sicar shares. Today, it is thanks to the asset management company, Capsa Capital Partners, that the fundraising of 4.5 million dinars has been made possible. Enova Robotics is valued at nearly 15 million dinars.

Listed among the largest manufacturers in the world in the robotics market, the fully exporting Startup (98% in Europe 2% in Saudi Arabia) markets three types of intelligent robots in the fields of safety, health and teaching: A remote surveillance and warning robot (sold at 68,000 euros) that detects and prevents real-time intrusions by radio transmission or 4G network on industrial or state sites. Another home robot designed to serve as home help for the elderly (sold at 18,000 euros) and, finally, a robot for teaching to help teachers to popularize robotics with their students.

A multiple gold medalist at the Geneva International Exhibition of Inventions, at the Middle East International Invention Fair, and during the World Intellectual Property Organization, Anis Sahbani continues his meteoric rise with the completion of this new round of fundraising.

Enova Robotics Achieves Biggest Fundraising For A Startup In Tunisia