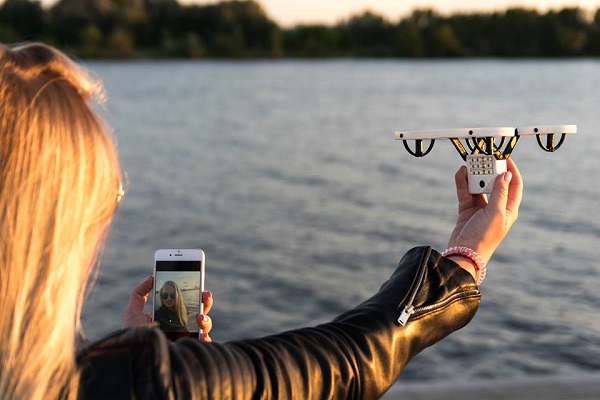 Egyptian drone startup Drofie has attracted the attention of the Swiss, securing a 25,000 Swiss francs (US$26,000) investment and a spell in the Kickstart Accelerator in Zurich.

The company is still pre-launch and will use the accelerator funding and the three month incubation to improve its pocket-sized ‘selfie’ drone prototype and to develop the business side.

The drone itself is advertised as having all the elements an aspiring fame-monster might want: an auto-follow mode, smile detection so it knows when to capture a moment, and a panorama shot ability, all controlled through an app. “Imagine pulling a camera out of your pocket, throwing it into the air and having it follow you around, capturing everything you do. Well, that’s exactly what Drofie does,” Ghaith told Wamda. The software uses four infrared sensors to avoid obstacles and uses a colour tracking feature to ‘see’ and follow a moving target.

Ghaith said most of the proof of concept work was done in Egypt.

From Alexandria, he moved to Latvia to study avionics six years ago but dropped out to follow a more entrepreneurial path (he

said he used to code software and sell it to internet cafes in Alexandria when he was 16). He met Egyptians Nebras Ozzo and Kusay Ali on Angel List last year and moved back to Egypt for a spell to work on the design. They moved to Latvia this year and the team, now seven-strong, is an international affair: it includes American, Latvian and Syrian nationalities. The startup has bootstrapped until now, and plans to launch a Kickstarter campaign possibly towards the end of this year. Gaith said it would be priced up to $400, although it’d launch on the crowdfunding site at a slightly lower rate.

While it may seem like the ultimate ego-trip, having a personal flying videographer following you through life, the potential for this kind of technology - done well - feeds into a growing drone market.

Ghaith said the drone industry today was worth $4 billion, led by Asia, andcited a research house’s conservative estimate of $5.59 billion by 2020.

Yet it could be much, much bigger.

In March a Goldman Sachs report valued the global commercial drone market at $100 billion by 2020, led by the construction sector.

And then in May, consultancy Pricewaterhousecoopers (PwC) upped the ante and put a $127 billion value on the market by 2020, with ‘media and entertainment’ making up $8.8 billion of that.

But the report warned that a lack of legislation around safety and privacy could block adoption and also slow the availability of insurance.

In terms of legislation, Ghaith said the Drofie drone was regulated by the US Federal Aviation Administration and small enough to not require users to need a licence. Down in flames The path of a hardware manufacturer however, is never easy, and highly-publicized failures in the field could be a problem for the startup, particularly when it launches its own crowdfunding campaign. In November last year, Drofie’s main competitor Zano went bust after raising a staggering $3.6 million from over 12,000 backers on Kickstarter, but before it could deliver any products. It also promised a hand-held mini-drone, but a BBC report found the end result lacking - poor battery life, low image quality and no autonomous features that had been advertised by the campaign materials.

Ghaith said the difference with Drofie was that his team had built the software from scratch. The Zano project instead adapted open-source technology which caused unexpected limitations down the track.

“We have already passed this stage, we do have today a proof of concept for our technology either our auto-pilot or optical flow,” he said. “The motors Zano used were brush motors that have low efficiency and generates hug vibrations, while in our case we use the latest brushless technology available today. By integrating our auto-pilot and optical flow technology we were able to achieve the maximum stability.”

From where the company sits right now though the future is bright. It has money, access to robotics experts from the IRIS Institute in Zurich, and a prototype that could become the amateur shutterbug’s best friend.