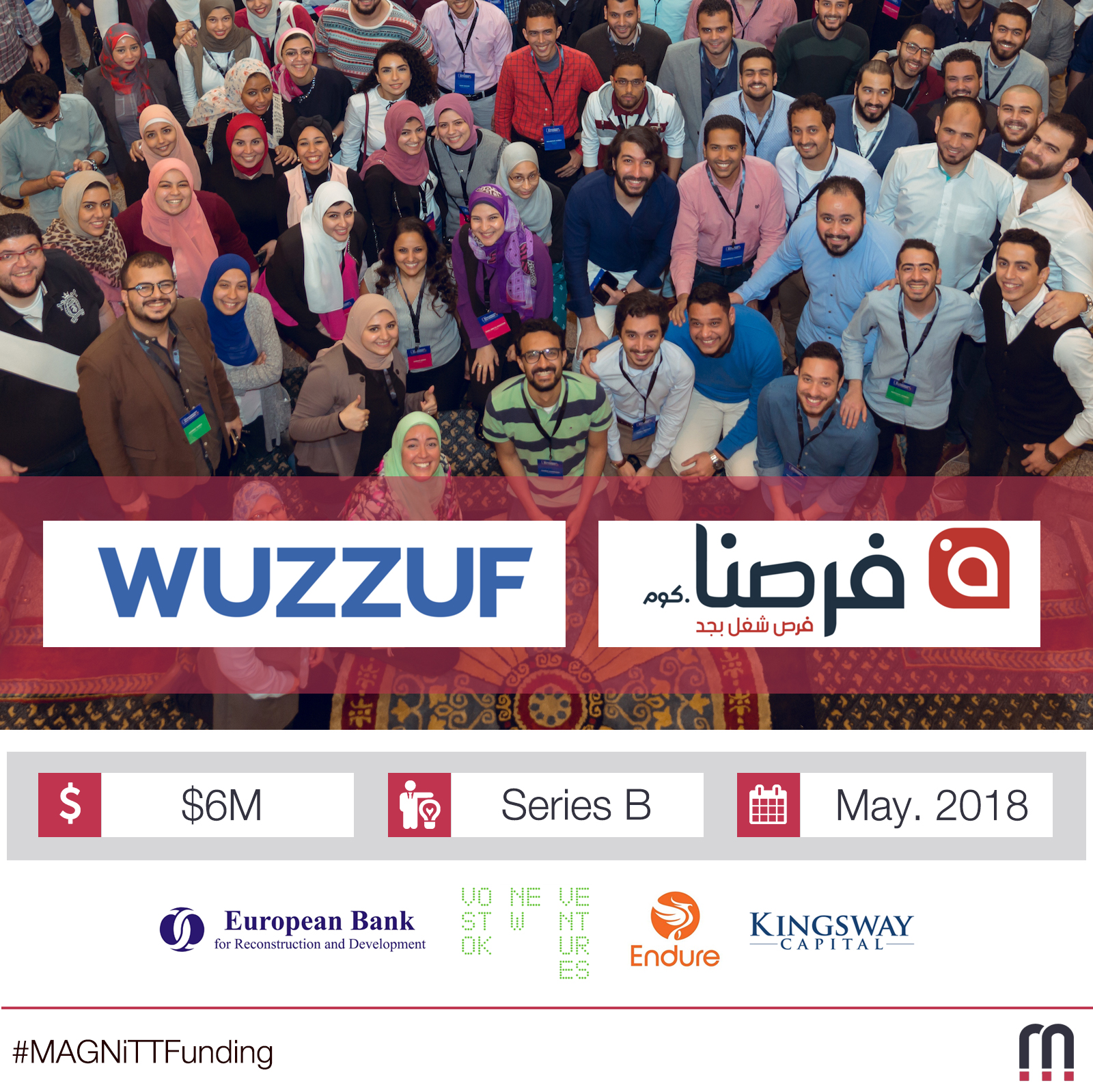 We all love success stories, and Wuzzuf is one to be proud of. Ameer Sherif and his team have grown step by step over the years to create a formidable platform for talent acquisition across the region. Participating in one of 500 startups earliest cohorts they have gone on to create two platforms that form the pillars of online recruitment in Wuzzuf and Forasna.

Today they announce their $6m Series B funding round from a syndicate of 4 International VC funds, led by the European Bank for Reconstruction and Development (ERBD) and Vostok New Ventures, Endure Capital and Kingsway Capital.

Vostok New Ventures, Endure Capital participated in previous rounds, whilst other previous investors include 500 startups, Piton Capital, and A15.  In Jan 2014, it was 1st startup from Egypt to join 500 Startups accelerator program and in 2015, closed a $1.7m Series A.

This is the largest disclosed Series B round ($6m) in a local Egyptian internet startup, which brings the total funding raised by the company to $8m to date.

To start with, the company had to bootstrap from 2011 after the Egyptian revolution to 2014. Having previously downsized and almost shut down twice during 2011 and 2012 due to tough market conditions, they have come a long way from where they started.

Ameer Sherif, CEO and Co-founder, has expressed his delight from the investment and thanks the investors participating, “It makes us proud to be the 1st tech startup in Egypt to get funding from so many global investors; 500 Startups accelerator, EBRD, Vostok New Ventures, Piton Capital, Endure Capital, and Kingsway Capital. This has opened more funding opportunities for other fellow Egyptian startups.”

Ameer explained to MAGNiTT that “the funds will be used to fuel our growth inside and outside of Egypt, across other markets, as well as spending in R&D efforts to maximize the use of artificial intelligence and machine learning in connecting people with jobs more efficiently.”

Speaking in regards to Egypt, Ameer says that their goal is to have 1 million people hired through their platforms every year by 2020. “With our fundraising tack record, doubling our business every year, and acquiring over 250+ team members, we are considered one of the fastest growing and largest internet companies in Egypt” he added.

Through both platforms, 2 million users have made 15 million job applications for 900,000 job vacancies advertised from 25,000 companies, leading to a total estimated 250k people hired.

BasharSoft, the company behind both platforms was founded in late 2009.

WUZZUF, is the leading jobs marketplace for white collar, highly educated professionals and jobs. Launched in 2012

Vostok New Ventures is a Swedish based VC. Their portfolio includes multiple unicorns including Avito and BlaBlaCar

Endure Capital is a US based fund investing in Silicon Valley and the MENA region, with unicorns in its portfolio including Careem.

Kingsway Capital and Piton Capital are UK based VC funds.

500 Startups is a US based fund investing in tech startups globally.