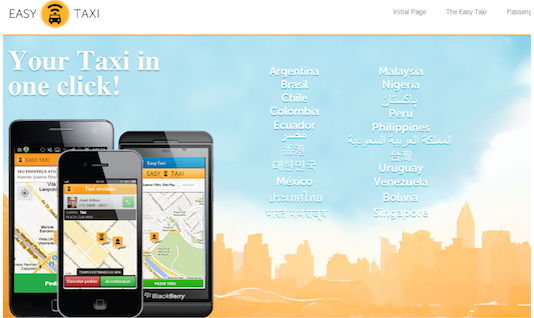 Easy Taxi, a Brazilian taxi calling app backed by Rocket Internet, has announced a Series D fundraising round of $40 million USD, led by Phenomenon Ventures with support from Tengelmann Ventures. While Easy Taxi is already present in Saudi Arabia, Egypt, Jordan, Kuwait, Bahrain, and soon Qatar, part of the Series D sum will go towards “launching in every major city in the Middle East which provides a good mobile infrastructure by the end of 2014,” says Vera Futorjanksi, international communications head at Rocket Internet and head of communications at the Middle East Internet Group.

The regional market for neo-taxi services is already quite crowded, with both international players like Uber, regional startup Careem, and myriad local companies like PieRide, KarTag, Injez, and others (many of the latter serve Cairo’s traffic snarled streets).

But while Easy Taxi has a lot in common with the Uber/Careem model – in-app ordering, cashless payment options, pre-screened drivers, etc. – Futorjanski insists that it’s actually quite different from the other neo-taxis that increasingly ply the streets of Arab cities. For one, rather than bringing more drivers into the taxi pool, “we connect existing taxi drivers with clients.” Easy Taxi is firmly customer facing, instead of adopting the two-sided driver-client approach of other new wave taxi services. “We don’t want to replace existing taxis; rather our goal is to raise the service level by imposing high quality standards, offering a modern and convenient way of ordering taxis, and providing new features like cashless payment, all while maintaining the same cost for our passengers,” Futorjanski says.

And people have taken notice, especially in the developing world. In the three years since its launch, Easy Taxi is the “clear market leader in Latin America, completing millions of rides every month,” says Futorjanski; the app has been downloaded three million times in Brazil alone. But “the [newly launched] MENA markets are quickly catching up. We currently experience triple digit growth each month in the region.” Asia is also catching on: 30% of Easy Taxi’s total rides are booked there.

To ease its expansion in the Arab region, to be funded by the new round, Futorjanski says Easy Taxi will rely on two factors: Saudi women and paper money. In Saudi, where it is illegal for them to drive, women account for 70% of Easy Taxi orders, and the company believes that it can “contribute to the quality of life of Arab women in the whole region.”

Futorjanski also mentions the region’s low rates of credit card penetration and reliance on cash as a payment method, saying that Easy Taxi’s cash payment option will allow for customer flexibility in countries where credit card use is not widespread.

While there may not be a huge difference in the user experience between Easy Taxi and Uber, the fact that Easy Taxi works with existing taxis rather than produces new ones may play a factor in whether it’s ultimately successful. This summer, there has been increasing pushback from taxi lobbies and governments alike against like Uber who are seen to be stealing fares from traditional taxis. Responding to this, Futorjanski is again quick to draw the line between Easy Taxi and the new wave: “We aren’t replacing any existing player but are rather helping the taxi industry improve their service. This is very much in line with the efforts of local governments.”

This in-between model may be just right for the Arab region, especially those areas that are still developing.