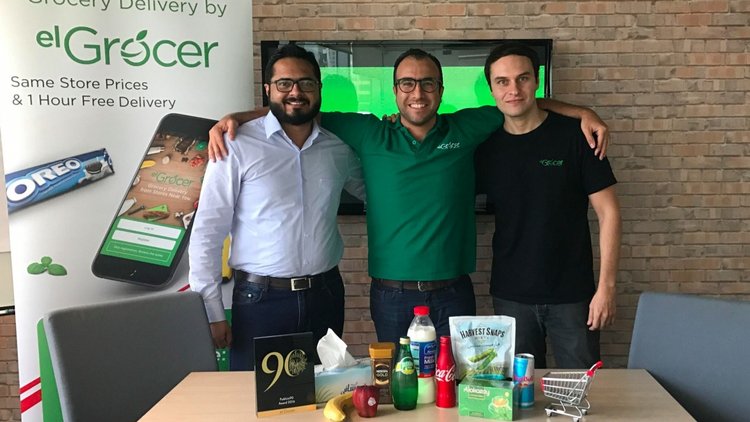 Launched in 2015, el Grocer is one of the earliest grocery e-commerce apps launched in the MENA region, with the brand managing to carve a pretty strong identity for itself within its core market of the UAE. Even with such a market standing, when the startup recently decided to raise funds to scale up further, el Grocer chose to step away from the venture capital route, and instead tried crowdfunding to help fuel its growth. Aiming to “stay light as they scale,” el Grocer started in April 2017 a 12-week campaign on Eureeca, a pioneering equity crowdfunding platform in the MENA, setting a target to raise US$300,000. And, to its credit, the company realized its goals in a matter of just four weeks.

The company closed the campaign in July 2017 as a “190% funded” company on the platform, with it being declared as the highest raise (and one of the most overfunded Middle East businesses) on Eureeca, at the time of writing. In terms of actual figures, el Grocer hit their initial $300,000 target by week 4, their next $400,000 target in six weeks, and by week 9, they had closed the funding just above $550,000. As for why crowdfunding seemed as the best option for el Grocer, CEO Nader Amiri says, “We had a couple of strategic individuals who loved the idea [of el Grocer], and wanted to get involved from an investment as well as support perspective. So, we thought, why not involve key individuals and many smaller ones through a reputable, modern, regulated platform in a simple way all in one go… It gives access to right amount of capital, smart network of investors who can be very helpful as we grow, and all with the same flexibility of running the business the way we see fit, until we scale further.”

A snapshot of el Grocer's crowdfunding on Eureeca.Image credit: Eureeca.
Hailing from an FMCG background (having worked with large enterprises such as Unilever, Kraft Foods, and Coca-Cola in the past), Amiri says the idea of el Grocer was sown in his and co-founder and UAE Country Manager Mickael Costache’s head as early as the emergence of online food delivery phenomenon. “It was a small thought in the back of my mind that I didn’t do anything about, and then a bunch of friends, ex-colleagues, and I got together to really build the idea properly, plan, and prepare for it to come to reality,” he says. The entrepreneurial bug, however, had bit him much earlier, with Amiri having been involved in ventures such as an unnamed marketing agency in Iraq, and helping out in his family business before conceiving the idea of el Grocer.

With a vision to create a “value-add marketplace platform to connect shoppers with retailers and brands to deliver convenience,” the startup wants to give users the power of choice, when in comes to their grocery buying habits. Be it the power to choose from a variety of stores, a wide-ranging product catalog, or the power to receive purchases in less than one hour (the app says orders will arrive within 60 minutes), el Grocer is operating as a welcome respite for busy and lazy shoppers in the UAE. “The other point [benefit] is our ‘same store pricing’ policy, which means no hidden mark-ups or fees,” adds Amiri, talking about the app’s policy to offer goods for the same prices as bought in-store.  Without divulging performance metrics of the el Grocer app, Amiri says they “had a good solid base of stores, users, and other key metrics” when they started their round with Eureeca, and with good organic growth coming their way, they are set to turn it into “high week-on-week double digit growth” on the back of the latest fundraising.

The mode of this round of el Grocer’s fundraising shines the spotlight on the state of crowdfunding in the region, and where it stands can be best understood from a finding by Khalifa Fund. The finding shows that approximately 50-70% of SME applications for funding in the UAE are rejected by conventional banks. “Loans to SMEs account for just 4% of the outstanding bank credit in the UAE, below the MENA average of 9.3%,” it reads. Yet, given that SMEs contribute nearly 60% of the UAE’s GDP, it is a dire necessity for alternate sources that seems to have fueled the growth of crowdfunding in the region, especially in the UAE. Accordingly, Dubai Financial Services Authority (DFSA) also launched recently a regulatory framework for loan and investment-based crowdfunding platforms, which is considered as on the first such frameworks in the GCC.

In such a climate, the kind of reception el Grocer has enjoyed on a MENA-based equity crowdfunding platform has the potential to inspire and motivate aspiring entrepreneurs seeking early-stage funding. However in terms of turnover time, Amiri cautions upstarts that the process can take roughly 3-4 months end to end, but has the benefit of being a much more transparent mode of funding, which also lets you test the waters on user response to your offering. Amiri is also candid in admitting that, at the start, they were skeptical of the potential of the route. This is where, he believes, the platform matters. “We got a lot of support from the Eureeca team- from proposal development guidance, to basic project management, to reducing the paperwork burden, to even cheering as we crossed some key milestones… it’s rare to find such serious, supportive, and fun partners, and we see them as partners vs. just a fundraising platform,” he says.

Amiri is hence all praise for the Eureeca team, and attributes their transparency, professionalism and local & international track record as a motivator for el Grocer to jump into equity crowdfunding. el Grocer’s crowd investors hail from countries such as UAE, Malaysia, Saudi Arabia, Lebanon, and Canada, and Amiri says the nature of investors too are a varied mix. “We have got first-time investors, students, mid-level professionals from many different industries, and we have some senior strategic investors too,” he says. It’s interesting to note here that this is the only other external backing the company enjoys, besides a seed round closed in May 2015 from friends, family, and early-stage investor Nuummite Ventures, and a grant/award from Publicis Group in the P90 Global Competition.

As for el Grocer’s growth plans, Amiri says the company currently earns revenue from two key sources -commission from the stores on orders and on value-added business insights, and earnings from brand partnerships- and is also working on a third revenue stream, about which we will hear soon. With regard to its strategy, el Grocer has its eyes on various e-commerce trends that it plans to leverage, with special focus on simplicity. “I think people underestimate the power of simplicity; it’s one of the trends that goes and comes, but always wins,” says Amiri. “The other interesting one [trend] that we have our eye on is AI. Thanks to our new funding, we plan to embark on this journey…It’s not an easy thing, and making it industry specific is even more challenging, but we have some cool ideas that we are working on,” he adds.

And will el Grocer reach back to the “crowd” to fuel its future funding needs? The entrepreneur admits that as e-grocery becomes more ubiquitous, and gains acceptances among users, the startup will need “a bigger war chest and wider strategic connections,” so is more likely to opt for VC/private equity and/or a family/individual investors approach. With a founding team that takes inspiration from successes of its global counterparts such as America’s Instacart and South Asia’s Happy Fresh at its helm, el Grocer is focused on becoming a name synonymous with e-grocery in the MENA region- here’s wishing them all the best for this goal!

What are some of the aspects users can watch out for with respect to el Grocer’s markets and product-related strategies?

“Geographic expansion is a key priority as we need to become more accessible- UAE expansion (Abu Dhabi, Sharjah) as short-term, [expansion in] key GCC cities in the mid- term, and rest of MENA in the long term [are our priorities]. Definitely, multilevel marketing optimization is key as well. Don’t forget that we are changing/evolving one of the oldest consumer habits of ‘grocery shopping’ so ensuring the right marketing channels, messaging/creatives, with the right frequency is important to evolve this habit.”

“As for product features, online payment is definitely one of the important short term priorities. It enhances the convenience of the entire experience. While in the long run, growing beyond just an ‘app’ is something we think a lot of. Apps will continue being important for years ahead, but surely providing the right ordering platform as consumer needs evolve will be key (think integration with smart fridges or leveraging VR).”

What are your thoughts on the MENA entrepreneurship ecosystem, its evolution over the years, and where it’s headed?

“Although I’m the new guy on this block, I’ve kept an eye on things and kept in touch with people in the ecosystem. One of the things that encouraged me to jump in is the improving transparency, faster progress, higher global interest in this region, and growth of funding availability. With economic diversification becoming more of a priority for GCC and MENA, it’s just a matter of time for the ecosystem to bloom. We as a team, and I as an entrepreneur, are taking big bets on this ecosystem that we see a very high potential in.”