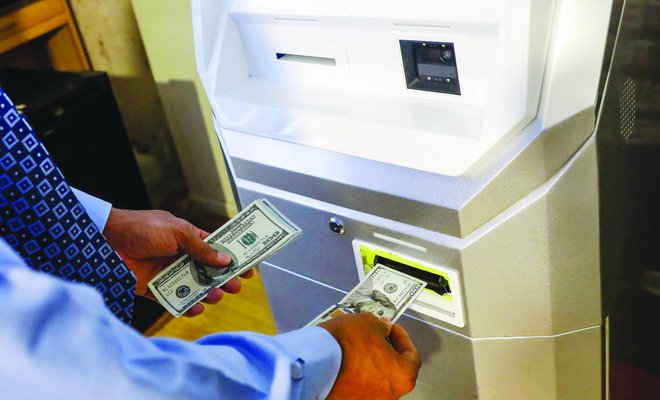 LONDON: The lightbulb clicked in Ibrahim Barbor’s mind last winter.
After watching a YouTube series about global financial markets, the young Dubai professional started researching bitcoin, a phenomenon he had heard about in online forums and passing headlines. The more he learned, the more certain he became that bitcoin was a worthy investment.

“I liked what it had to offer,” said Barbor. “You’re in complete control of what you own, there is a limited supply of it so you can’t just print your way out of it like a government, and its value had been increasing for a while. So I said why not?”

Barbor joined a growing number of people across the Middle East and throughout the world who believe that digital currencies like bitcoin are as good — or better — than cash backed by a central bank.

His investment appears prudent: Since he bought his first coin in February of last year, the value of the digital currency has risen astronomically from $1,000 to more than $16,000 at the end of last week.

The spike in bitcoin prices has set the world of currency investing abuzz, and the Middle East is no exception. While funds across the region seem to be hedging their bets for the moment, a growing number of individuals like Barbor have joined the bitcoin rush, with many trying to hop on the fast-moving train.

Mohammed Alsehli, the founder of Dubai-based investors tech company ArabianChain, was an early adopter, buying his first bitcoins in 2011 when they were valued at just $3.

Like Barbor, Alsehli had grown disillusioned by the way traditional currencies were valued. “Today, currency is just backed by debt, that’s it,” he said.

When, following the financial crisis of 2008, a mysterious person or entity known as Satoshi Nakamoto developed a digital currency backed not by a central bank’s guarantee but by the trust of the user community, Alsehli grew curious.

Those calculations are used to verify the authenticity of transactions across the bitcoin network. As payment for their services, miners receive their welcome reward: bitcoin, which today is worth ten times more than gold.

Despite its meteoric rise, Alsehli said the technology is still in an early adoption phase, and still resides in the realm of esoterica for most people he speaks to. “If you ask somebody on the street how to buy a bitcoin, they don’t know.”

But new developments, including the first sale of bitcoin futures this weekend, mean that the currency is moving ever further into the mainstream.

In recent weeks, investors led by American hedge funds have been buying up the currency at a rapid rate, sending the prices soaring. Some fear it is a bubble that is doomed to burst. “There is a little bit of a gold rush going on, but it’s also justifiable, especially when it comes to bitcoin,” Alsehli said. While there are a number of cryptocurrencies on the market, bitcoin is the most mature and the most trusted.

Still, a series of digital heists over the years have plagued the currency. Just this week $64 million worth was stolen from a Slovenia-based digital coin exchange. If people start to lose confidence in the currency, sell-offs could send bitcoin prices plunging.