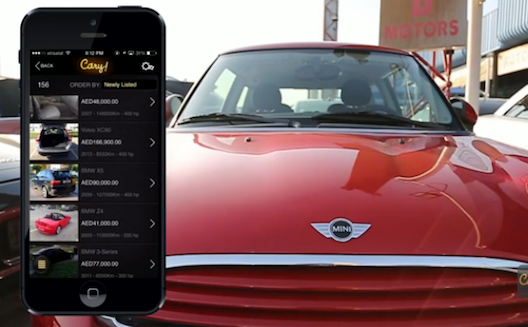 Eureeca investors have been enthusiastic for Cary!, a mobile app for buying and selling cars in the UAE, in the two weeks since the startup launched its campaign: two days in, the campaign reached 25 percent funding; two weeks in, Cary! has reached 48 percent of its $103,400 goal. If the crowdinvestment campaign is successful – which, at this point, looks likely – it will show that the market for tools for exchanging cars in the UAE has not been completely tapped out by the multiple services currently available, including Dubizzle, Auto Trader UAE, or Sell Any Car.

The obvious question: What differentiates Cary! from these other services?

“Cary! is the first social mobile app – NOT a classifieds of listed cars,” founder Mohammed Johmani, also the founder of mobile app developer Mobibus, tells me in an email. “Cary! allows users to socialize while searching for cars, allowing them to know who is the owner and his/her profile, unlike other platforms where the car owner is unknown.”

Further, while other car listing engines require the buyer to either “print all shortlisted cars from the web, or literally take the laptop with them to get the car details and meet the owner,” as was the case when Johmani and his wife were in the market for a used car, Cary! allows the buyer to perform all these tasks with nothing more than a smartphone (either iPhone or Android) and the app itself.

It might be a small segment of the car buying population who would prefer to use a mobile app, but Johmani seems content with serving this group well. “We plan to remain mobile and play in this area, leaving the web portals [to play] in their own space.” This is hardly a ‘disruption’, as the slick promotional video claims, but it seems a realistic enough goal.

Allowing participants in potential business transactions to check each other out online prior to the deal may be useful, but the app’s single, unverified data stream may hinder a fully fleshed-out picture of the potential buyer or seller. Linking to a Facebook or Twitter profile would do a lot to make users seem more like real, accountable, trustworthy people.

While surely the idea itself has had some part to play in Cary!’s early Eureeca success, Johmani is quick to laud not only the facility of the Eureeca team (which, after wins by Nabbesh, Foodlve, Abjjad, and Poupée Couture, is by now familiar with what it takes to launch and manage a successful crowdinvestment campaign), but the trendiness of the platform itself.

“I have never considered crowdfunding before,” he says. “However, the way Eureeca has done it, has given me many reasons to associate my brand with them. The exposure they have given me is priceless, and most importantly, I have gotten so much feedback and advice from potential investors (whom I’ve never met),” he continues. “Hence I believe what I am gaining from Eureeca is more than just the money.”