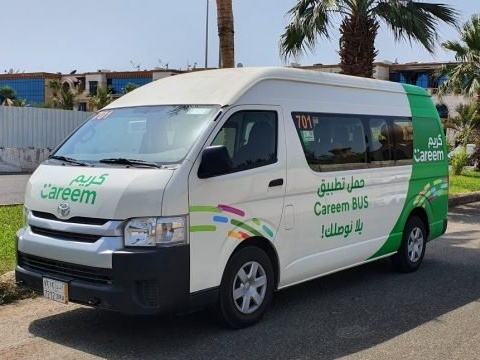 The Dubai based famous ride sharing app Careem has launched its bus services in Jeddah, Saudi Arabia. The announcements came in this Monday.

The service is targeting daily commuters and has started with a fleet of 20 buses, all of which are 13-seater air-conditioned buses.

Depending on the route, the price per trip would be kept between SAR3 to SAR5, which is 60-70 percent cheaper than the Careem car service. The buses will be available to the public from 7 am to 8 pm and will only stop at the city landmarks.

The three routes within which the service would be available are: Tahlia Street loop, Hira Street east-west-east and Prince Sultan Road north-south-north.

Careem will take the customer feedbacks very seriously, and continue to work on adding more offerings.

The service can be availed by the commuters by using a separate app from the regular one, which is already available for download on Android and iOS.

The users will be given options to choose their pick up and drop off locations, and then the app will offer them the bus that best suits their time and location. Just like the Careem car application, customers will be able to track the bus as it arrives. The service is also open for walk-on passengers.

The only payment method is cash at the moment, but Careem has promised to add Careem wallet and credit card as payment methods very soon.

Careem has partnered with vendors who employ the drivers and take care of their fixed monthly salary. They will be collecting the fares and will pay a fixed daily amount to vendors.

The Director of Careem Bus, Hadeer Shalaby, told Gulf Business: “The 13-seater service has been a huge success in Egypt, easing traffic flows and providing a safe and efficient way to commute. The app based service is as seamless as ride-hailing a car, allowing customers to enjoy the benefits of our tech as well as enjoying cheaper travel and reducing traffic on the roads.”