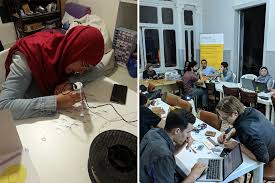 BEIRUT’S TECH SCENE HAS SURGED OVER THE PAST DECADE, with the development of a glitzy digital district in the city’s downtown and a burgeoning number of startups and coworking spaces.

The blossoming of tech entrepreneurship in the small Middle Eastern country has been sped along by central bank funding for startups — but the tech boom also has its more grassroots side, driven in large part by one scrappy hackerspace.

Lamba Labs opened in 2012, the same year the Beirut Digital District was launched with more fanfare and a considerably higher price tag. The project shared a space with Karaj, a media lab in Beirut’s then up-and-coming Mar Mikhael neighborhood, which is now a hipster district full of bars and cafes.

Lamba Labs came about when Bilal Ghalib, an Iraqi-American entrepreneur on a mission to start hackerspaces in the Middle East, connected with a group of young Lebanese geeks eager for the same thing.

Ghalib had seen the rise of hackerspaces in the U.S. after the 2008 economic collapse, when plummeting real estate prices and a glut of unemployed, tech-savvy young people converged.

The idea was simple: Bring together people interested in technology, give them equipment and a space to work with, and see what unfolds.

After the Arab Spring of 2011, Ghalib and others saw a need for a similar movement in the Middle East. “Hackerspaces needed to happen in the Middle East just like they needed to happen in the U.S. when everything was collapsing,” Ghalib says. “My idea was to find all these people and bring them together and tell them about this process and that it’s possible to self-organize.”

THE CORNERSTONE OF LAMBA LABS HAS ALWAYS BEEN THE WEEKLY BUILD NIGHT in which members and curious newcomers can use the space and equipment — including a soldering station, a 3D printer, and the rare (in Beirut) commodity of high-speed WiFi — to experiment and work on projects.

At one build night, you might find a group of members figuring out how to put together an underwater camera drone. At another, they might be bumbling around the lab blindfolded to test out a sensor belt intended to help blind and visually impaired people navigate more easily.

Other events have focused on digital security and privacy tools, cryptocurrency and blockchain technology, and using Open Street Maps to help a project aiming to map Beirut’s previously uncharted system of buses and vans.

Lamba Labs has also spawned projects that went on to become business ventures. For instance, two of the founders invented an automatic guitar tuner — the Roadie — which they are now selling on a commercial scale.

This maker movement that is sweeping the region is democratizing the process of manufacturing and giving us power over the means of production.

The all-volunteer group has been through its share of shakeups. Some core members have left the country in search of better opportunities, a common phenomenon in Lebanon among ambitious young people.

One member, Raja Oueis, died of cancer in 2015. A year earlier, in a TED Talk, Oueis spoke of his hope that hackerspaces could help to realize the hopes in the region that rose from the Arab Spring.