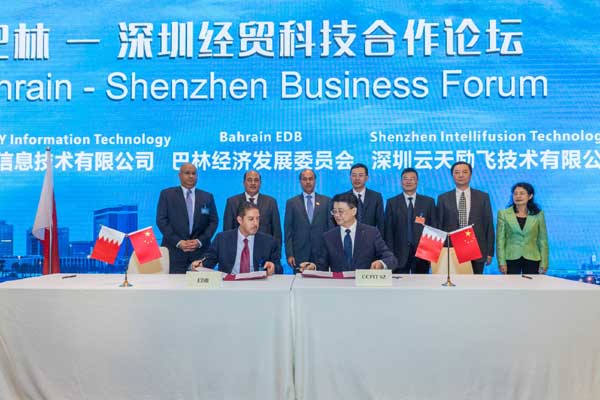 A senior delegation from Bahrain recently visited Shenzhen, China, to discuss opportunities to strengthen cooperation and signed eight landmark agreements with Shenzhen in the areas of technology and transportation.

The delegation was led by Capital Governor Sheikh Hisham Bin Abdulrahman Al Khalifa and organised by the Bahrain Economic Development Board (EDB).

They met with Ai Xuefeng, vice mayor of Shenzhen and a number of local government officials and business leaders at the Bahrain – Shenzhen Business Forum and the China High-Tech Fair, said a statement.

Next year marks 30 years since China and Bahrain established diplomatic relations. In advance of the pearl anniversary, Bahrain is set to further deepen economic ties with China.

Bahrain signed eight landmark agreements with Shenzhen in the areas of technology and transportation to include:
• A memorandum of understanding (MoU) between EDB and the artificial intelligence (AI) firm, Intellifusion Technologies to advance AI dynamic portrait recognition that can benefit China, Bahrain, and the Middle East. Additionally, the MoU aims to promote the exchange and development of AI technology by sharing experiences and information through seminars or forums as well as exploring the potential for establishing headquarters and an AI institute in the kingdom.

• EDB partnered with Shenzhen FinTech company, IAPPPAY, to establish a full mobile payment gateway in Bahrain and explore opportunities in cryptocurrency, the possibility of initiating FinTech Funds, the potential for the establishment of a Mobile Internet Incubator in the kingdom to accelerate regional digital economic development, the promotion of investment opportunities in Bahrain to leading industrial players in China, as well as the establishment of a FinTech ecosystem between Middle East and North Africa (Mena) and China.

• EDB and 4PX signed a MoU exploring the possibility of 4PX initiating and establishing funds together with Bahraini companies in order to invest in entrepreneurship in China and Bahrain.

• EDB and Shenzhen Cool-hi Network Culture Technology partnered to promote the development of E-sports between the Middle East and China including hosting E-sports events and exploring investment opportunities in E-sports downstream supply chain between Mena and China.

• Bahrain Chamber of Commerce and Industry (BCCI) signed a MoU with the China Council for the Promotion of International Trade Shenzhen Branch (CCPITSZ) to harness and enhance collaborative initiatives to promote trade and investments between the two countries.

• EDB and CCPITSZ signed a MoU to harness and enhance collaborative initiatives between Bahrain and Shenzhen, strengthening information exchange and cooperation in economic and business activities.

Since Manama – the capital city of Bahrain – and Shenzhen signed friendship city agreements in 2016, the two cities have forged a number of business links. In June 2018, Bahrain EDB inaugurated its representative office for Southern China in Shenzhen, aiming to facilitate more investments by Chinese companies in Bahrain.

Sheikh Hisham Bin Abdulrahman Al Khalifa said: “Our partnership with Shenzhen was built on common heritage as open and innovative business hubs with shared economic interests. We are very pleased to see our ties with this vibrant city continue to strengthen and believe these agreements will help us move towards a new era of collaboration.”

Khalid Al Rumaihi, chief executive of Bahrain EDB, said: “Shenzhen is the first city with which we stablished a friendship city agreement in China. We see our partnership with Shenzhen as a model for forging wider and deeper business ties between our two countries.”

“There are numerous opportunities for Chinese companies in the region, especially as the GCC markets continue to transform their economies. Bahrain’s location as the Gateway to the Gulf, and given the fact that it is one of the key countries along the new Belt and Road route, along with our open and liberal lifestyle, competitive business landscape, and world class regulation makes the kingdom the ideal location from which Chinese companies can access this $1.5 trillion GCC market,” he added.

Ai Xuefeng, vice mayor of Shenzhen, said: “Bahrain is known as the Pearl of Gulf and is an important port on the ancient Maritime Silk Road. Bahrain is also one of the most open and dynamic countries with the top-ranking business environment in the Middle East.”

“Bahrain and Shenzhen are already partnering in a number of areas. We sincerely hope to further work together with Bahrain to achieve greater prosperity between the two countries, promoting cooperation in key areas including finance, ICT, innovation and startup, and tourism,” he added.

The Bahrain – Shenzhen Business Forum was attended by 250 people. Shenzhen is the first stop of the Bahraini delegation’s nine-day tour of China’s principal commercial centres.

The delegation will visit Hangzhou, Shijiazhuang, and Beijing as it continues to explore deeper economic ties with China ahead of the 30-year anniversary, it stated. – TradeArabia News Service