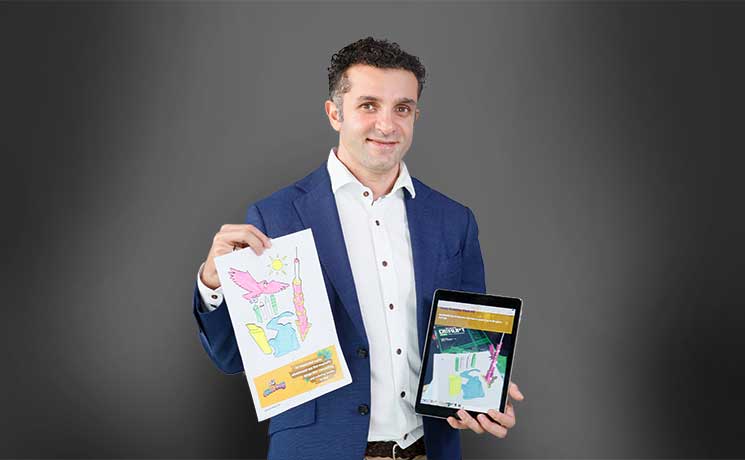 Pokémon Go was music to Dany El Eid’s ears. The 34 year-old Lebanese is the founder of Pixelbug, a Dubai-based startup that uses augmented reality—the overlaying of computer-generated information or images on an object, view or person. It’s the same technology as Pokémon’s, but El Eid applies it to help brands market their products.

“The technology [augmented reality] doesn’t really sell itself,” says El Eid. Technology can be too early, or overhyped.

But for brands always on the hunt for ways to engage with consumers, Pokémon’s popularity suddenly presents a new opportunity. “Since [Pokémon Go] went viral we’ve seen a threefold increase in leads,” says El Eid. “A lot of the troubles we would face in explaining what augmented reality was, have now been removed.”

In 2012, with $15,000 from savings, El Eid founded Pixelbug. His former roommate and fellow Lebanese Elie-Charles Youssef, who also worked in advertising in Dubai, joined as head of business development. Denis Kruger, a German national who was in marketing at another local agency, also came on board. He helped design the software.

El Eid convinced Omair Siddiqi, who was Procter & Gamble’s consumer engagement marketing manager at the time, to sign on, and won projects for Pantene and Ariel.

The Ariel campaign ran for 10 days. Pixelbug developed an app, which was installed in kiosks embedded with cameras, in department stores in Riyadh, Jeddah, and Dammam. Shoppers held up a box of the laundry detergent in front of the camera, which prompted the Ariel logo to turn into a white t-shirt on the kiosk’s screen, before being splattered with virtual paint. People moved their box around to avoid the splatter. “It was the first large-scale implementation that we did,” says El Eid.

In 2014, the startup created an interactive mobile game for Nestlé Middle East, targeting children. Increasingly kids as young as four were adept at using their parents’ smartphone or tablet, and brands were looking for ways to interact with them beyond TV.

Called Quicky’s World, the app featured Nesquik’s signature cartoon bunny. Kids can point a phone’s camera at a yellow box of Nesquik cocoa powder and watch Quicky materialize in 3D. Lynn Al Khatib, media relations manager at Nestlé Middle East, says it was a hit with six to twelve year-olds. The app has close to 250,000 downloads.

The Nestlé experience helped inspire them to create an app called Colorbug. For free, kids can choose from a selection of 30 stencils. They range from “Bugsy,” Colorbug’s logo, to a falcon called “Fatah” soaring over Burj Khalifa in Dubai.

Those figures reside in a cloud database, and when a mobile device’s camera points at say, Bugsy, the software matches it with the corresponding image in the database, triggering an animated video.

At the reopening of Umm Al Emarat Park in Abu Dhabi in March 2015, Pixelbug demoed Colorbug by distributing stencils for the occasion, along with some iPads. Children colored a whimsical-looking turnip. They then held an iPad over the image, camera facing down, and watched in awe as the turnip popped on the screen. It sauntered, waved and blinked on a 3D landscape.

Maestro Pizza, a chain of 75 pizzerias in Saudi Arabia, commissioned a stencil of a chef holding a pie for its young customers. Using the app, they could watch the chef slide a pizza in an oven.

But as corporate projects took a backseat, Pixelbug started burning through cash. “It took a little bit longer than it should,” says Youssef.

The founders began searching for outside funding for the first time, in order to keep the company afloat. They approached investors, who turned them down, wary of the technology.

El Eid came across the MIT Enterprise Forum Arab Startup Competition on Facebook, and applied. In April 2015, Pixelbug won $50,000. This was followed by more good news, when Pixelbug raised $50,000 from Turn8, an accelerator and venture fund.

The celebrations would be short-lived.

By late 2015, Youssef was having doubts about the company’s direction. He thought the shift towards Colorbug was unsustainable, and that they should refocus on corporate projects. “You can’t turn your back on the revenue stream that’s keeping you alive,” he says. His partners disagreed. Youssef decided to quit, and sold his shares to El Eid.

Pixelbug soldiered on. In April 2016, it partnered with mobile operator Du to offer customers premium Colorbug content for about 30 cents a day.

The following month, it closed a $350,000 seed round from Dubai-based Prime Venture Partners. Soon after, an arm of French advertising giant Publicis Groupe invested $55,000 in convertible notes.

El Eid intends to stick with Colorbug, while being selective about custom corporate projects. He’s also finishing an application that uses virtual reality, a different kind of immersion experience, and the next hot thing in Silicon Valley.