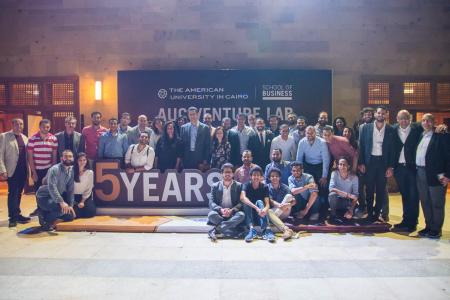 Cairo – In celebration of its fifth anniversary and the incubation of over 100 startups, The School of Business’s Venture lab (V-Lab) at The American University in Cairo (AUC) will hold a Demo Day to showcase the products and services of 13 incubated startups graduating from V-Lab’s two programs, the Arab African International Bank Cycle 10 and the Spring'18 FinTech Cycle.

"AAIB's initiative to partner with AUC venture lab as a leadership co-founder in 2013 is a translation of AAIB's belief in the potential of Egyptian entrepreneurs. The collaboration between AAIB and AUC Venture Lab marks a unique alignment between financial and academic institutions for the interest of entrepreneurs. We strongly believe that innovative youth are the key drivers of Egypt’s future growth,” said Hassan Abdalla, chief executive officer of the Arab African International Bank, “As a main driver in the Egyptian economic scene, the financial sector must play a role in empowering the entrepreneurship ecosystem in the country.”

Ayman Ismail, director of AUC V-Lab, Abdul Latif Jameel endowed chair of entrepreneurship and assistant professor at AUC, said: “We are proud to hold the Demo Day for 13 incubated startups and we are also proud to launch our angel investment network. Over these five years, V-Lab's journey has been both rewarding and challenging as we have been growing and shooting for a bigger and more sustainable impact year after year. It is very exciting that we get to celebrate our fifth anniversary among our graduates and supporters.”

Dean of the School of Business, Sherif Kamel said: "Since its establishment in 2013, the AUC Venture Lab has augmented its role in evolving the entrepreneurial ecosystem in Egypt through offering a diversified portfolio of activities and services that cater to the needs of promising entrepreneurs and startups in Egypt.”  He added: “We are proud and privileged to be considered among the region’s leading university-based incubators offering services to students on campus as well as the community at large across Egypt’s different governorates. AUC Venture Lab is delighted to be ranked by UBI Global among the three Top Challenger University-based Incubators in the Middle East and North Africa region for the year 2017/18 reflecting our mission and direction and confirms the school’s commitment and determination to create a scalable and positive impact on the society.”