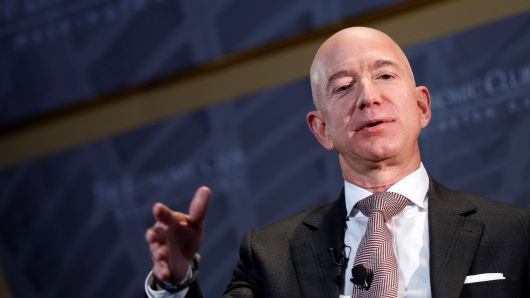 The company is telling sellers to focus on Amazon's main site instead of Souq.com, the Dubai-based online retailer it bought for $580 million in 2017.

The move will give a unified brand and back-end system for Amazon in the Middle East, while helping more U.S.-based sellers expand in the region.

As Amazon searches for growth outside the U.S., its next big push is the Middle East.

Amazon has been reaching out in recent weeks to large third-party sellers in North America, informing them of an upcoming opportunity to reach consumers, first in the United Arab Emirates and then in Saudi Arabia, according to several merchants who spoke with CNBC. They all asked not to be identified because the discussions with Amazon were private.

With the launch of the Middle East marketplace in the coming months, Amazon is downplaying Souq.com, the Dubai-based online retailer it bought for $580 million in 2017 — its priciest international acquisition. The company is telling North American sellers not to sign up to sell on Souq because it plans to have all that inventory on Amazon's own site.

"Following Amazon's acquisition of Souq, I want to offer you participation in a groundbreaking new sales project in the Mid East," Amazon wrote in an invitation to a select group of sellers. "Our program is simple, straightforward and allows you to expand your selection to a new base of Amazon buyers."

The move comes as Amazon seeks to find a formula for profitable growth in its retail business, which counts on North America for 69 percent of revenue. The U.K., Germany, and Japan account for the majority of international sales. Amazon has struggled to build substantial businesses in China and India because of local laws and hefty competition, and its retail division still loses money every quarter when excluding the U.S. and Canada.

Sellers say that Amazon is most excited about getting beauty products like perfume, as well as electronics, into the two largest Middle East economies. In September, Amazon launched a local service in Turkey, marking the 17th global site. Brian Olsavsky, the company's finance chief, said on the earnings call in October that Amazon is "very pleased" with the international business, though the "story is different country by country."

The new Middle East marketplace would look similar to Amazon's other international websites, like Amazon U.K. or Amazon Germany, giving it a more unified appearance and brand in the region, sellers said. It would also come with the same seller back-end system used in the U.S, and access to Fulfillment by Amazon (FBA), the company's storage and shipping service.

As part of its outreach, Amazon has been hosting a series of educational webinars to a small group of U.S.-based sellers. In the invitation, Amazon describes the new service as a "groundbreaking" project, adding that it comes with a free dedicated account manager and steep discounts on commissions and logistics fees.

Amazon said in the webinar overview that commissions will be 3 percent for FBA. That is substantially lower than Amazon's rate in North America.

The Middle East is a potentially lucrative market for Amazon. Parts of the region are rife with millionaires, and most business transactions are done in English, making it easy for U.S.-based sellers to expand.

But it also brings unique risks, namely a reliance on oil. Saudi Arabia's economy shrank for the first time in nearly a decade last year as concerns about a global slowdown weighed on oil prices.

Then there's politics. Amazon CEO Jeff Bezos owns The Washington Post, which employed Saudi columnist Jamal Khashoggi at the time of his slaying in October by agents of the kingdom. The Post described the events following Khashoggi's killing as a cover-up, leading to a campaign in Saudi Arabia to boycott Amazon and Souq.

Still, Amazon is aggressively recruiting sellers into the market. The acquisition of Souq was designed to help Amazon quickly gain a foothold in the Middle East, as Souq was already one of the largest online retailers in the region. But the company hasn't made any significant moves since the acquisition.

It's unclear whether Amazon plans to shutter Souq altogether or is just de-emphasizing it to focus on its main site. There's some precedent for Amazon: In 2017, it closed Quidsi, the parent company of diapers.com and soap.com, which it acquired for $545 million seven years earlier. Though it cited profitability challenges for the closure, Amazon had little need for Quidsi because it was selling the same products on Amazon.com.

For now, Amazon still lists dozens of job openings for Souq, with most of the positions in Cairo, Riyadh and Amman, Jordan. The company is looking to hire software developers and vendor managers.