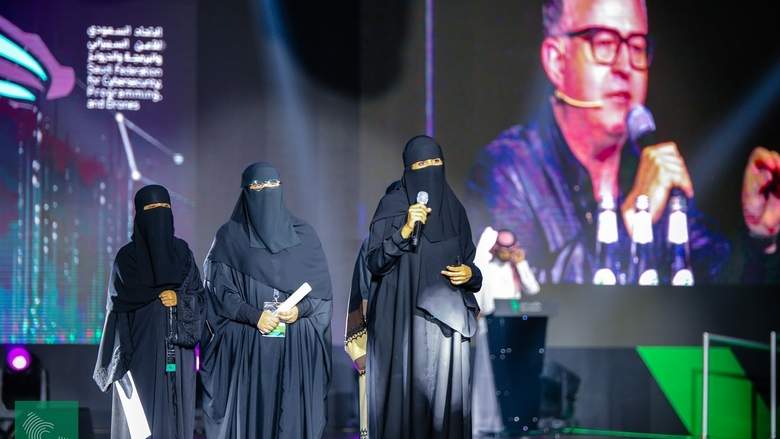 An all-female team of Saudi computer developers and programmers has won first place at the first Haj Hackathon, held in the port city of Jeddah, where thousands of tech heads competed to come up with the best high-tech solutions to facilitate and improve the Haj experience for pilgrims.   Haj Hackathon, the largest event of its kind ever held, came to a close on Friday night with the announcement that the team of Saudi young women, 'Turjuman', had been named the overall winner in the competition to propose state-of-the-art technological solutions to the massive challenges of accommodating the arrival of about 2 million pilgrims for Haj and millions of others for Umrah throughout the year.   The Saudi young women, who developed the Turjuman instant translation app to facilitate communication by pilgrims from all over the world, took home the first place prize of SAR1,000,000 (approx. Dh1m) after a very strong competition with a total of nine teams.

The competition's eight-member judging panel included Steve Wozniak, co-founder of Apple Inc.   Asked by the announcer how she felt after winning, Ragda Al Qadi, one of the Saudi team members, said: "Praise be to God. We are really tired and we thank God that we made it to first position."   "The team's feeling is indescribable. We are very happy. It's all thanks to God and then to the team's cooperation," Samaher Al Houthali told the crowd.   Asked if she had expected to win, Rawan Al Matrafi replied: "I said goodbye to my family and told them that I will be coming back to you with the one million (riyals)."   An all-male team from Egypt, which developed the 'Haj Wallet', came in second place, winning SAR500,000, while in third place, a mixed team from Algeria which developed the app 'Roaa' or ('Visions'), won SAR 350,000.

A special award of SAR 150,000 went to the team 'I 007' for an app for the management of the Haj e-camps.   Saud Al-Qahtani, adviser to the Royal Court, and founder of the Saudi Federation for Cyber Security, Programming and Drones (SAFCSP), which organised Haj Hackathon, tweeted a photo grouping the winning Saudi women, all in black head-to-toe Islamic dress, carrying their green national flag. On Twitter, Al-Qahtani wrote: "As a Saudi citizen, I do not hide my joy and pride in the daughters of this generous country." He said that the fact that this team of Saudi young women are first place winners is "an indication of the continuing success and excellence in the process of empowering Saudi women."