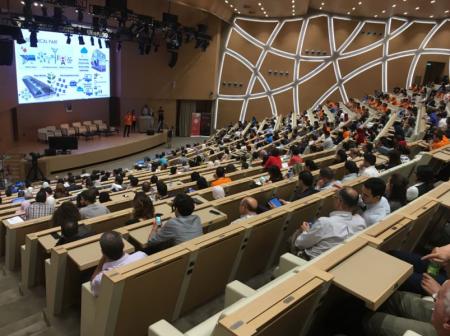 Algiers - The global research and consultancy company Oxford Business Group(OBG) congratulates the success of the Smart Cities Global Technology & Investment Summit held at the Centre International de Conferences (CIC) of Algiers on June 27th and 28th, under the patronage of the President of the Republic, Abdelaziz Bouteflika.

This technology and investment summit gathered over 200 speakers among the world's leading high-tech experts from more than 40 countries. During the meeting, the discussions were centered on strategic orientations, actions to be carried out and planning of the next steps of Algiers Smart City, a fundamental project to accelerate the development of a technological ecosystem in the Algerian capital.

On the occasion, OBG has published a brochure presenting the new technology industry and entrepreneurship in Algeria as well as a study outlining the accomplishments and medium and long-term goals of the Algiers Smart City project. More than 3000 copies were distributed to participants throughout the event. The booklet will be updated and inserted in the next publication of OBG's The Report: Algeria 2018, which will be available at the end of the year.

Algeria, like a lot of the emerging world, is confronted to a specific challenge in terms of innovation in the development of new technologies, namely: Isolation, Dependency and lack of Confidence (IDC). “These three factors represent a key issue that Smart City project is hoped to tackle,” Riad Hartani, Strategic Technology Adviser for the Algiers Smart City project, told OBG. “Algiers has to be brought forward towards international investors in order to enhance its potential for these technologies, as well as become a pioneer in Africa. The summit was definitely a great opportunity to gather these actors in Algeria to enlighten its potential,” he added.

Thanks to the participation of the most successful start-ups in the competition organized during the summit, they received financial support, as well as coaching from key national and international entrepreneurs, and significant support from the Algerian diaspora. Algerian entrepreneurship's dynamism was highlighted, which was a priority of the event. "To best leverage our diaspora, policymakers have a prime role in identifying diaspora talent that has the prerequisites and be proactive in defining projects optimal for them to lead and develop. The diaspora dimension is key and they shall be welcome to contribute to the development of their country,” said Fatiha Slimani, Head of the Smart City Project Algiers.

The summit was also an exceptional chance for Algiers to discuss with leaders of smart cities in Europe, Middle East, Asia, Africa and America, with a strong attendance of Silicon Valley, to present and endorse its distinctive model and seek strategic partnerships. The broad participation, which included institutional investors, international bankers and technology development organizations, sent a clear signal about the importance of the project, not only for Algiers, but also for emerging countries.

"Smart cities built on a next-generation digital infrastructure have the potential to generate significant economic benefits. The challenge is to move urban ecosystems towards sustainable, inclusive development that puts individual aspirations at the center of the strategy," said Malik Faraoun, vice president of the World Economic Forum for the MENA region.

Étienne Piciocchi, Director of Strategy and Finance at Xona Partners, said: "Smart Cities are lauded as an answer to rapid urbanization and environmental issues in emerging markets. They may well be if they address the basic needs of populations and are tailored to local socio-economics. Success also depends on infrastructure development, social and digital inclusion, women's empowerment, and education for all,” he said.

The closing ceremony of the event saw major announcements and closing interventions from representatives of the World Bank, the Islamic Development Bank, the World Economic Forum, the Smart Africa organization as well as from key representatives from the Silicon Valley. The presence of all the actors of the local ecosystem, with a heavy presence of the youth and diaspora bodes well for the future of Algiers and Algeria, as it plots its next phase of development.

"Local and international investors have an important role to play in stimulating innovation in Algeria. With a booming market, a young population and developed infrastructure, Algeria has everything to become a hub for new technologies," said Jaime Pérez-Seoane, regional editor of OBG for North Africa. "To do so, the focus should not only be on project financing, but also on how to create a business start-up environment to generate new revenue and enable efficient technology transfer."