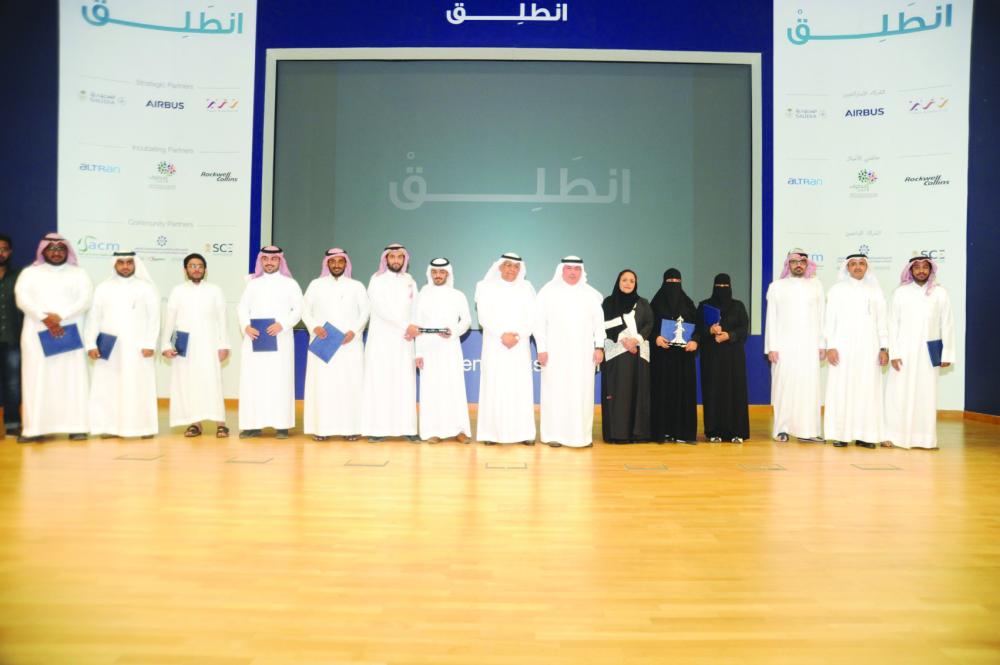 RIYADH — The winners of the ‘Entaliq in KSA’ initiative have been announced today at a ceremony held under the patronage and attendance of His Highness Prince Dr. Turki Bin Saud bin Mohammed Al Saud, President of King Abdulaziz City for Science and Technology in Riyadh. In line with the Saudi Vision 2030, ‘Entaliq in KSA’ in partnership with TAQNIA Aeronautics and Saudi Arabian Airlines is an initiative that empowers entrepreneurial talent from the aerospace sector. A day before the closing ceremony, the top 10 finalists pitched their ideas before a judging panel that consisted of aerospace industry experts. Following a six-month scouting run for innovative solutions for the aerospace industry, the three winners were deemed to have generated the best ideas. The three winning ideas of the ‘Entaliq in KSA’ initiative are: “The Traveler Eye” by Nouf Aljalaud that showcases information of landmarks passed during the flight using augmented reality on aircraft windows. “Landing Gear Motor” by Ahmad Alhamad which aims at minimizing the amount of lost rubber during landing and “VR Flight Entertainment” by Abdulaziz Abdulrahman Al Musayib, Ahmad Ali Alshareef, Nouf Abdulaziz Alrayes, Mosab Nasser Alouais, Khaled H. Ghubaysh, and Ibrahim Abdullah Alsayyari, which enhances passenger experience using VR. The three winners will be aided further in the development of their organizational and business plans with incubation opportunities that bring their ideas to fruition. The incubating partners of ‘Entaliq in KSA’ include Rockwell Collins, Altran, and Qotuf, that will work with the winners to sharpen their vision and business proposition. ‘Entaliq in KSA’ initiative, having concluded its second edition, represents a nationwide hunt for talented Saudi Arabian entrepreneurs. It is specifically tailored to inspire and support talented individuals who possess an idea or business model in its start-up phase.