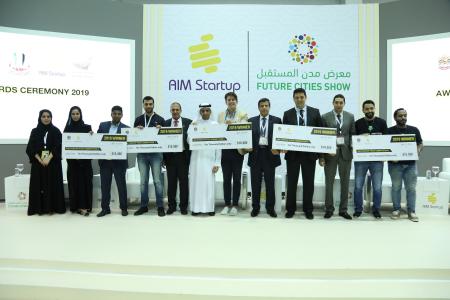 The third edition of AIM Startup, which was organised in conjunction with the Annual Investment Meeting (AIM), named Winnon, Zero Prime Technology, Dhonor Healthcare, Grintafy and Aviotron as the winners of the Startup competition. Following a continuous series of pitch competitions, the announcement was made on the final day of the international meet.

While Winnon was awarded a prize in the Growth category, Zero Prime Technologysecured a win in the Social Impact category.Dhonor Health Care was declared a winner for the early pre-launch category, while Grintafy and Aviotron won the competition in the early post launch category. Winners were awarded with USD 10000 each for their participation and encouraging ventures.

UAE’s Ministry of Economy has established the National Program for Small and Medium Enterprises with the aim of empowering SMEs and developing general frameworks and guidelines aimed at providing the necessary expertise, technical and managerial support and training for SMEs. This emphasis was shared at the third edition of AIM Startup, which was hosted in partnership with the National Program for Small and Medium-Sized Enterprises.

Dr.Adeeb Al-Afifi, Director of the National Program for SMEs and Projects, said, “AIM Startup represents this year’s emerging companies in Dubai and in MENA, in a forum that links investment opportunities and investors from around the world. AIM Startup is a platform where we can showcase the economic developments the UAE has achieved, as well as its economic diversification, which has opened the door even wider for a range of investment opportunities, making it a top destination for investment.”

According to Dr. Al-Afifi, that the number of registered SMEs has reached 98% of the total registered companies, and 89% of which are into trade and service sector, accounting to 49% contribution to UAE’s non-oil GDP, a fine reflection of the country’s attraction of investment. The total number of SMEs in the country as a whole, and specifically those registered in Dubai, is increasing.

Start-ups were judged on the uniqueness of their idea and othertraditional criteria like the ability to scale, the existence of product market fit and the skill set and preparedness of teams.

AIM Startup Award Ceremony is designed to celebrate the most innovative entrepreneurs, recognize their ideas as well as celebrate and put the spotlights on their achievements.