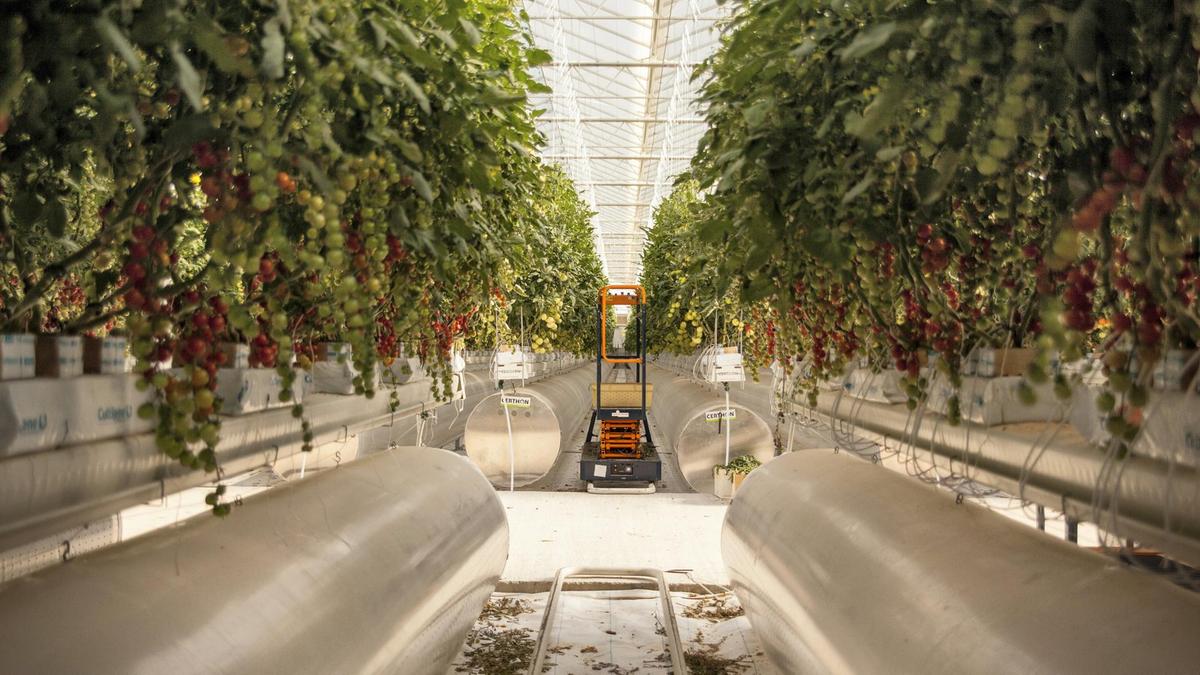 Pure Harvest’s proprietary solution has positioned the Company as a pioneer of high-yielding, year-round, local production of fresh fruits and vegetables within the GCC region.  The Company’s breakthrough growing system was specifically designed for addressing the challenging summer-time climates of the Arabian Gulf region. The inaugural greenhouse was developed in partnership with CerthonTM Greenhouse Solutions, a leading Dutch designer and builder of modern greenhouses.  Indoor temperature, humidity, and carbon dioxide levels are carefully balanced and automated using a climate management computer system developed by PrivaTM, a leader in horticulture and building automation.

The Company achieved first harvest of its initial products (candy tomatoes, tomatoes-on-the-vine, and cherry tomatoes-on-the-vine) approximately two months after commissioning its facility in early-August. Early results have been overwhelmingly positive, with the greenhouse achieving market-leading produce quality and beating targeted yields by 20% for its first season – evidence that the solution can be economic at scale.  The performance of the greenhouse climate control system has enabled the Company to be the first agribusiness company in the UAE to produce commercial quantities of fresh tomatoes during extreme summer climate conditions.

Pure Harvest is currently selling its products to major retail customers across the UAE including Spinney’s, Carrefour, Waitrose, Zoom, and Choithram’s as well as select hotels and restaurants, including the Four Seasons.  Driven by the early success of its launch, Pure Harvest is now preparing to launch a $10 million+ fundraising for its expansion within the UAE and the Kingdom of Saudi Arabia in early-2019. In October 2018, Pure Harvest received a disbursement of AED 5.5 million, from the Mohammed Bin Rashid Innovation Fund (MBRIF), a federally-sponsored initiative conceived and sponsored by the Ministry of Finance, and operated by the Emirates Development Bank (EDB).

“Agricultural facilities such as Pure Harvest Smart Farms are instrumental in enabling the UAE to achieve independent food production and food security for its citizens - I am therefore delighted to be able to congratulate the farm’s dedicated management and team members on their first crop and market entry of premium tomatoes. Pure Harvest Smart Farms is the perfect example of a facility that can help the UAE meet its Future Food Security goals.” said H.E. Mariam bint Mohammed Saeed Hareb Al Almheiri, Minister of State for Food Security.

“I am extremely proud of what my team has achieved with this first-of-its-kind growing solution.  We are overwhelmed by the strong feedback from early customers regarding our products. The tomatoes truly ‘taste like they should’!  I’m excited to begin our expansion in early-2019 and to diversify our production, including always-available, sustainably-grown strawberries,” said Pure Harvest Co-Founder and CEO Sky Kurtz.

“Pure Harvest Smart Farms is the embodiment of the water-food-energy Nexus. As a local start-up, Pure Harvest truly expresses the vision of the Netherlands of sustainability through innovation. We are proud that a total of 6 Dutch companies are involved in this project. This farm is a great example of what the Netherlands has to offer, and it are initiatives like these that will bring the UAE towards the goal of mitigating climate change, and promoting sustainable food production. Our Dutch model of the Golden Triangle, in which government, knowledge institutes and companies work together, has led to many innovations in the fields of agriculture, water and energy, and the synergies (or ‘nexus’) between those fields. Today Dutch companies continue to develop innovations and new technologies, not only in the Netherlands, but across the world in different environmental contexts. In the Gulf region we have recently launched our new campaign ‘Dutch Connection in the Gulf - Uniting Water, Energy, Food’, that offers exciting new opportunities for our cooperation with the UAE. We have been partners with the UAE for many years, and are here to stay” said H.E. Ambassador Frank Mollen, Ambassador to the United Arab Emirates from the Kingdom of the Netherlands.

“This extraordinary greenhouse is a great example of the next green revolution. Priva is proud to create a climate for growth with Pure Harvest”, said Maren Schoormans, Head of Strategy for Priva.

“We congratulate Pure Harvest Smart Farms on this milestone that is set to transform how high-quality food is produced locally in our nation. The innovative use of technology in farming is accelerating the UAE’s journey towards food security and at MBRIF we are committed to partnering with such pioneering businesses, which are aligned to the UAE’s National Innovation Strategy,” said Ahmed Abdullah, Acting CEO, Emirates Development Bank.

"Certhon contributes with this project by implementing our worldwide experience, knowledge and technical innovations into the UAE and bringing food security a step closer. Let this first project of Pure Harvest be an example of the possibilities and our capabilities to enable year-round sustainable horticulture of fresh and healthy local produce with efficient use of resources,” said Richard van der Sande of CerthonTM Greenhouse Solutions.