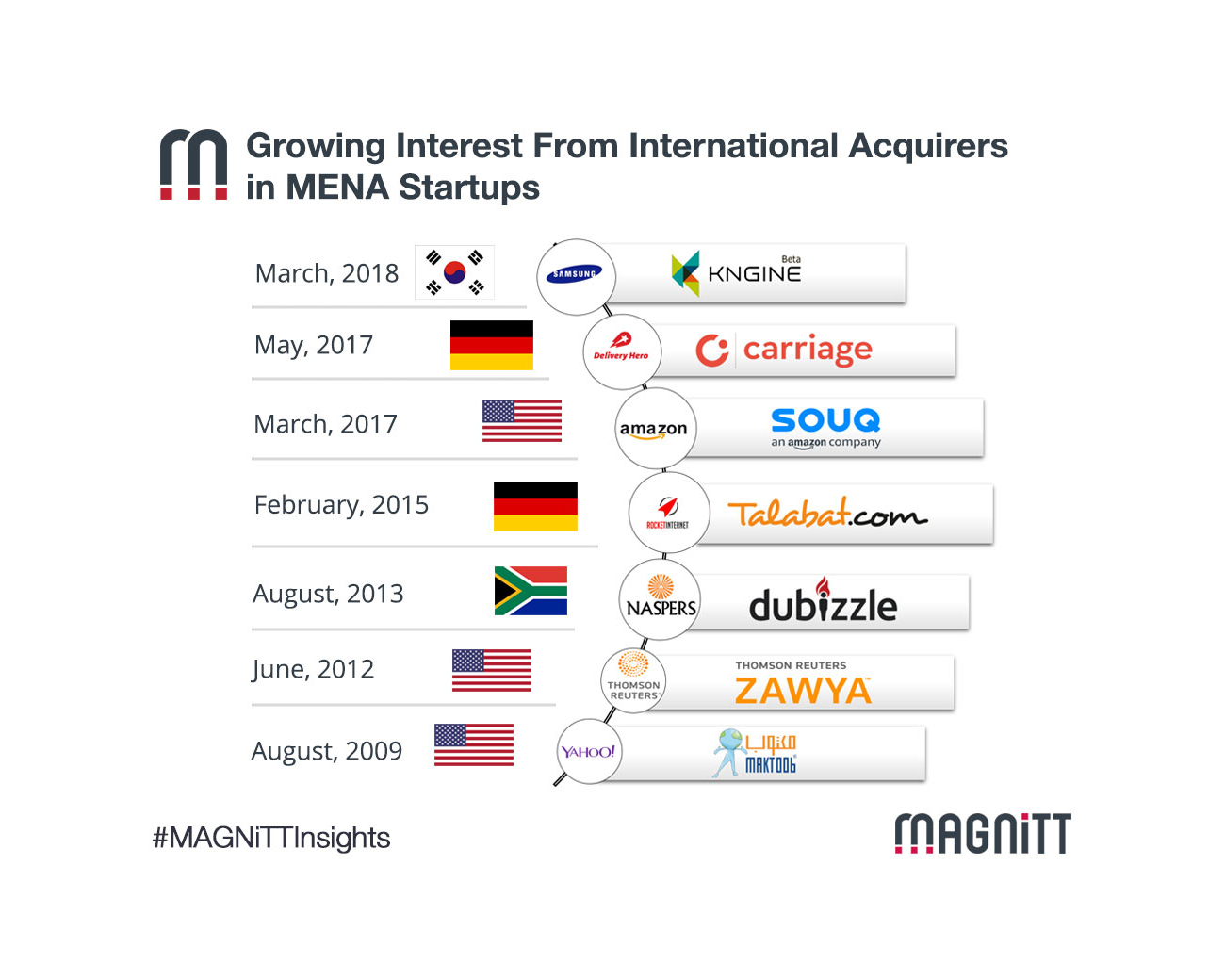 By MAGNiTT
Posted 4 years ago - Apr 4, 2018, 6:19 AM
Data Analytics and Business IntelligenceMAGNiTT

A startup Exit is defined by Business Dictionary as “Point at which an investor (usually a venture capitalist) sells his or her stake in a firm to realize his gains (or losses).” Commonly this is when a startup is either acquired or in a position to Initial Public Offer (IPO) their startup on an exchange.

Acquisitions and IPOs are the final step of the founder’s journey. They are also the light at the end of the tunnel that investors seek to have a return on their stake in the company. This is why they are such a hot topic of conversation here in the MENA region. The more success stories of exits, the more mature the market develops and more investment and intellectual capital to give back to the ecosystem.

Acquisitions are more prevalent in the US and Europe than they are here in the region, however in recent years we have witnessed an increase in the number of exits in the region. This has been lead by increased international interest in the region by international players looking to acquire a regional footprint for their company as well as increased M&A and consolidation in crowded industries.

According to our MAGNiTT Exit report in 2017, there had been a total of 60 startup exits across MENA in the years of 2012 to 2017. In terms of an update, last year alone, 21 startups were acquired with 4 exits announced in 2018 alone. This brings the total number of exits in the region to 79.

Dubai-based AMEinfo.com is the oldest acquired company in this list. Founded in 1993, AMEinfo.com is a business news website which provides English and Arabic information about the MENA region, and was acquired in 2006 by London-based media company, EMAP for $29M.

Maktoob was founded in 1998 in Jordan. Known for being an Arabic social network and the world's first free Arabic/English Web-based Email service, they got acquired in 2009 by Yahoo! for $164M. This symbolized Yahoo’s first significant step towards its expansion into the Arab region.

UAE-based Zawya was founded in 2002 and is known as a “Bloomberg for MENA” as an online service supplying business information in the Middle East and North Africa. Zawya got acquired in June 2012 by Thomson Reuters in a deal approximatively worth US$40M according to Arabian Business. Considering Zawya’s strong brand image and offerings in the region, the acquisition paved Thomson Reuters’ way into the MENA market and resulted in a more diversified line of services.

Founded by J.C.Butler and Sim Whatley in 2005, Dubizzle is an online e-commerce company for people in the Middle-East. Widely considered by some as the Arab version of Craigslist and eBay, Dubizzle exited in August 2013, and got acquired by OLX, a company owned South African media multinational Naspers.

Founded in 2004, Kuwait-based Talabat is an internet restaurant delivery service which operates in Kuwait, KSA, UAE, Bahrain, Qatar, Oman and Jordan. Seeing the Middle East as “one of the most attractive markets with significant growth potential”, German e-commerce group Rocket Internet entered the GCC by acquiring Talabat in a deal worth $170M in February 2015.

Considered as one of the most important exits in the Middle-East, U.S. retail giant Amazon entered the Middle Eastern market by acquiring Souq.com, the largest e-commerce platform in the Arab world. The deal was worth $580M and gave Amazon a strong player in the region.

Berlin-based Delivery Hero had made their second acquisition at the time in May 2017, by buying a Kuwaiti rival, Carriage, for an amount of $100million. Carriage is a fast-growing food delivery platform which operates in the GCC and with this exit became Delivery Hero Group’s arm into the Middle-East.

One of the latest exits in the region was that of Egyptian artificial intelligence startup Kngine this year. The acquirer was none other than South Korean multinational Samsung who through Kngine intend on improving their next version’s digital assistant, Bixby 2.0, which is expected to be launched late 2018.

Want to find out more? Subscribe to MAGNiTT’s Analytics package to review the full list of all Exit’s in our Exit tracker as well as gain access to our Exit report and monthly Analytics reports to keep up to date with the MENA ecosystem.