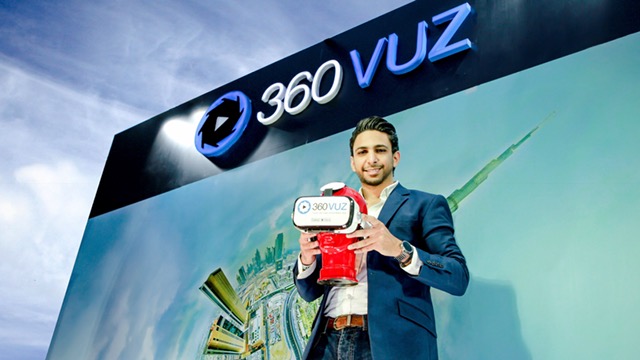 SOURCE: Dubai News Style - 360VUZ secures the first round of funding in the virtual reality segment in the Middle East 28th February 2017

360VUZ, the pioneer virtual reality startup in the Middle East, announced today that it had raised an undisclosed round of venture capital led by Dubai Silicon Oasis Authority, a 100% Dubai government-owned free zone, and several Angel Investors. Some of the Angel investors are public figures in the media industry or they manage investment portfolios of some of the most successful businessmen in the region.

With this new capital, along with the expertise and support of its investors, 360VUZ will accelerate its growth plans, continue to build its team, further invest in marketing and technology, and enhance its user experience to extend its leading position. 360VUZ is the number #1 and leading Virtual Reality 360 Video app in the region featuring exclusive content of latest events, experiences, behind the scenes and destinations The. mobile app has attracted over 350,000 users in less than 8 months since launch. featuring exclusive content.

“The 360VUZ team and the investors believe that virtual reality is the next computing and media platform. It’s an emerging technology and we are committed to maintain our leadership to touch the lives of millions of people around the world and help them travel in time virtually. Our partnership and collaboration with Dubizzle, Flash Entertainment, Dubai Government, Apple, Samsung, and Zain is a reconfirmation on how big players believe in our vision as well. This is only the start.” said Khaled Zaatarah, the founder of 360VUZ.

With this round 360VUZ have attracted a very strong passionate team full of energy, skills and motivation going after a big underserved market. The team is an experienced team with relevant expertise coming from some of the top organizations in the world such as Apple, Procter and Gamble, Redbull, Souq.com , Starcom and Dubai Government.

360VUZ is believed to have the potential to significantly disrupt regional markets and fast track virtual reality in the region. Virtual Reality is booming , a recent Goldman Sachs research report predicts Virtual Reality and Augmented Reality growth is expected to reach over a $120 Billion industry by 2020.

360VUZ is the first of its kind app in the Middle East region in terms of size, idea, market reach and scalability. 360VUZ is a mobile application with a new approach to offer exclusive 360 Virtual Reality video content to audiences in a new creative way. The app reached over 350K downloads with a strong customer viral network and acquisition. 360VUZ reached global ratings and currently ranks in the top 3 apps in the Middle East App Store panorama / 360 video featured category.

360VUZ is believed to have the potential to significantly disrupt regional markets and fast track virtual reality in the region. The app showcases exclusive 360 videos and virtual tours created by partnering and working with top players in the market such as Samsung, Choueiri ,Starcom ,Dubizzle, Dubai Government, Apple and many more. 360VUZ is now adding new features and technologies to the app for users to be able to connect through very special APIs to scale up and bring amazing new immersive content to the world. 360VUZ vision is to help millions of people travel in time virtually to see the full authentic picture and the let users be the directors of the show.

With the newly signed partnership with Dubizzle on September 2016, 360VUZ is now pioneering and taking as well the 360 virtual reality real estate industry by a storm.

SOURCE: Dubai News Style - 360VUZ secures the first round of funding in the virtual reality segment in the Middle East 28th February 2017