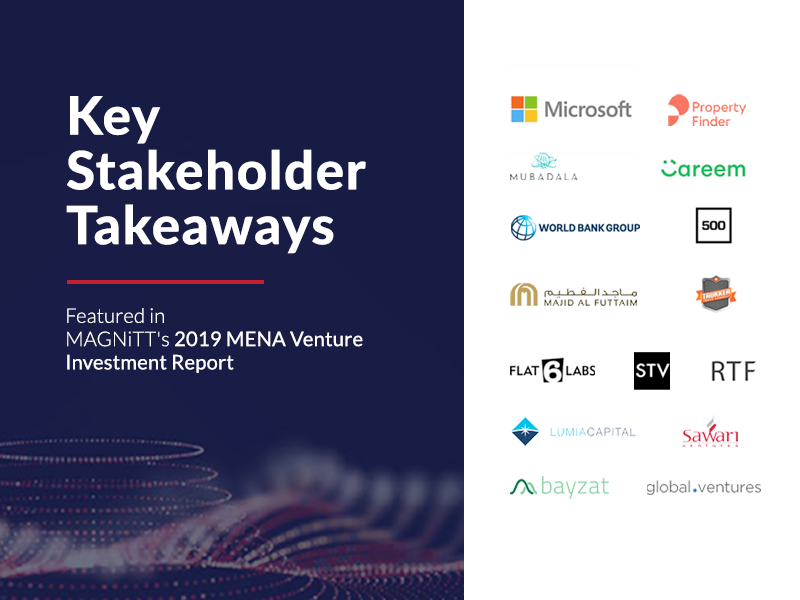 We reached out to some of MENA's leading stakeholders on their views and opinions on the state of the ecosystem in the 2019 MENA Venture Investment Report. As evidenced by the report's data, 2019 was a highly productive year for startup ecosystems across the region, which caught the attention of many influential stakeholders from a host of organisations. Discover who they are and what they had to say below:

"MENA had a record number of deals in 2019, following a pattern of exponential growth in a number of countries. Many governments in the region have been playing an active role in growing ecosystems conducive to entrepreneurs, including technical and financial support programs and policy reforms – there is a direct correlation between a business-friendly environment and increased entrepreneurial activity."

"The MAGNiTT report accentuates the thriving startup ecosystem in the MENA region and specifically in the UAE, with investments growing yearover-year. As Mubadala, we are contributing to this regional transformation by deploying capital and leveraging our unique access to a network of global investors and experts."

"The MENA region has long had the right “metrics” to be attractive: a large, growing, and youthful population. Moreover, you now also have success stories, such as Careem, and sovereign wealth funds deploying capital. This is great “signal” to US-based investors. The more comfortable they become with their MENAbased counterparts, the more likely they will give the portfolio companies a serious look."

"The establishment of new venture capital firms, as well as VCs launching follow-on funds, is a very positive step for the region – it increases the ability for regional funds to lead larger rounds as their portfolio companies grow, furthering self-reliance for the ecosystem. That said, the gap to global benchmarks of capital deployed into ventures is still significant."

"The rise in accelerators is a reflection of the increased maturity of entrepreneurs and startups, but also the concentration of funding in later stages, creating a bigger need for the steady pipeline of high-potential entrepreneurs coming out of the accelerators, making them essential for the growth of the whole industry."

"Many corporates in MENA are risk-averse and still hesitant to explore the entrepreneurial landscape, as they prefer to focus on improving their core business. In the age of digitization, it is imperative for corporates to shift their mindset to accommodate for new technologies, rapidly changing consumer behaviors and new channels. Working with startups can be the most agile approach for corporates to execute faster, outsource R&D and change their internal culture."

"The bottom line for any business is that it must keep pace with the rate of change in its industry, while trying to achieve a competitive advantage at the same time. Being actively involved in the region’s start-up ecosystem is one way to ensure this. In many cases, it allows us to provide services much more quickly than if we had to develop them ourselves. We deal with entrepreneurs who bring fresh approaches and ideas, and by interacting with start-ups our own teams gain new skills and insights."

"Money goes where opportunity exists. In Egypt, we have seen an increase in deals – not only because we have more local capital investing, but we are also seeing capital inflows from investors in the GCC and elsewhere. Local entrepreneurs are becoming more mature and they are solving larger scale problems in the country and beyond."

"Saudi Arabia has shifted up in the GCC and MENA ranking by both number of deals and total funding. There are three main reasons – first, the realization of the importance of SME investment; second, the availability of risk capital, resulting in creation of new or larger VC funds and third, embracing entrepreneurship as a respectable career path. We expect the invested capital to increase very significantly in the next five years."

"FinTech will continue to be a popular industry for investors and entrepreneurs as new FinTech startups emerge to enable financial services across the value chain. We’ll also see mature ones raise larger rounds as they look to become fully regulated, since there has been no traction in partnerships with traditional players."

"The logistics and mobility sector offer a lot of opportunities for technology-based efficiencies and innovation. I am confident that the sector will continue to attract significant investor attention given its fundamental value in the real economy and industry in general."

"The primary reason for the acceleration in exits is that tech companies in the region are starting to have scale, becoming attractive for global strategic players. Secondly, the Gulf countries offer emerging market growth rates without the currency risk, as they’re mostly pegged to the Dollar. Finally, the average ticket size in the region has significantly increased in the last year, which allowed local players to make acquisitions."

"Our region is one of enormous opportunity - half of the population is under 25 years and people are connected and receptive to new technologies. When we launched Careem back in 2012, we quickly realised that in order to succeed in scaling across the region, we would need to develop deep knowledge for each and every city we operate in. Every market has its nuances - from the regulatory framework it operates under, through to the physical infrastructure, through to the way customers prefer to interact and pay for our products and services. We hope that our efforts have set the way forward for other tech startups to approach expansion across the greater Middle East and that our deal with Uber will act as a catalyst for further investment into the ecosystem."

We would like to thank all the contributors for their views and opinions.
Haven't read the report yet? Access the free summary HERE