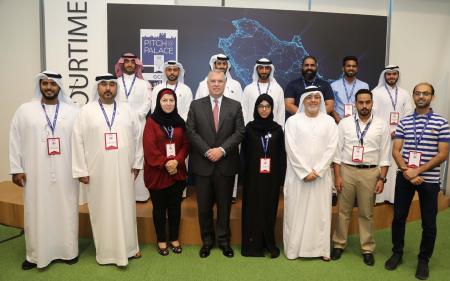 Abu Dhabi - Khalifa Fund for Enterprise Development (KFED) successfully organized the ‘Boot Camp’ phase of Pitch@Palace GCC 1.0, where 15 qualified Entrepreneurs attended an intensive practical and analytical training and coaching programme to help them gear up for the final pitching event, showcasing their innovative ideas to top-level leaders and decision makers. The two-day Boot Camp programme, held at Khalifa Innovation Center in the Khalifa University in Abu Dhabi, was attended by The Duke of York and Founder of Pitch@Palace Global who launched the Pitch@Palace Global initiative in 2014; H.E. Hussein Jasim Al Nowais, Chairman of Khalifa Fund for Enterprise Development, H.E. Abdulla Al Darmaki, CEO of Khalifa Fund for Enterprise Development; and VIPs from the UAE and the region. The competition, being held under the patronage of H.H. Sheikh Mohamed bin Zayed Al Nahyan, Crown Prince of Abu Dhabi and Deputy Supreme Commander of the UAE Armed Forces, was lauded for its key role in fostering a spirit of innovation and creativity among budding entrepreneurs in the UAE, as well as the GCC region.

H.E. Hussein Jasim Al Nowais, Chairman of Khalifa Fund for Enterprise Development, welcomed the strategic partnership between the Fund and the Office of HRH The Duke of York, which provides a unique platform for Entrepreneurs to showcase their projects to key decision-makers.

He added: “The Fund has succeeded in bringing the Pitch@Palace Global initiative to the UAE and the GCC region, and confirming the role of Khalifa Fundas key driver in the country’s and region innovation agenda. This much-awaited competition aligns with the Fund’s goal of providing diverse opportunities for the youth, enhancing cooperation between Entrepreneurs in the region and connecting them with the global entrepreneurship platform. It also support reinforcing the UAE pioneering role in supporting entrepreneurship and creativity.”

He said: “Khalifa Fund continuously strives to support the youth of the country and enhance their contribution to nation building, with the support of H.H. Sheikh Khalifa bin Zayed Al Nahyan, President of UAE, and in line with the directives of H.H. Sheikh Mohammed bin Zayed Al Nahyan, Crown Prince of Abu Dhabi and Deputy Supreme Commander of the UAE Armed Forces. Following the success of the first edition of Pitch@Palace UAE and its positive impact in the country and the region, Khalifa Fund took the lead to extend this competition to the neighbouring countries as well. Today, we remain fully committed to continue our quest for excellence and become role model at the local, regional and global levels in fostering a culture of innovation that encourages entrepreneurs to dream big and to equip them with the necessary resources to transform this dream into reality.”

This year’s Boot Camp focused on innovation as the cornerstone of entrepreneurship, success, sustainability, growth and progress. The programme combined practical masterclasses that encouraged entrepreneurs to explore various approaches to innovation, and analysis sessions that delved in detail into various business models and their transformation and expansion as a result of innovation. Participants received valuable insights into the various banking requirements and formalities, drawing up a perfect business plan, developing a professional legal framework to ensure the success of their efforts and various investment opportunities in the field of technology. Masterclasses were made about real-life success stories of small companies that dared to innovate and incorporate technological advancements into their business operations. Participants also received the golden chance to review their pitches in detail, which helped them to gear up for the final pitching event.

The Boot Camp was designed to train 15 qualified entrepreneurs, that included 8 Emiratis and 7 nationals from Saudi Arabia and the Kingdom of Bahrain. The UAE edition of the competition witnessed a high turnout this year, with 91 participants, out of which 63 were selected for the first and second on-tours. The first ‘On-Tour’ event of the UAE edition was held at New York University in Abu Dhabi, where 32 entrepreneurs took part. The second ‘On-Tour’ was held at the Sharjah Entrepreneurship Center ‘Sheraa,’ with the participation of 28 entrepreneurs.